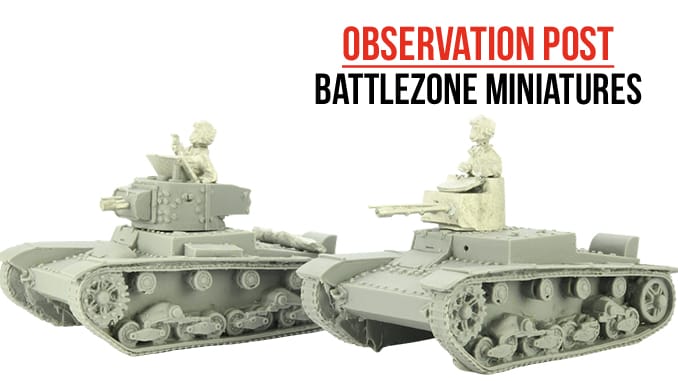 Battlezone Miniatures continue to add to their 20mm early World War Two Soviet range. Two of their new light tanks are based upon the T-26 chassis.

The first tank is the KhT-130 Chemical Tank, a flame throwing tank produced in 1933 using the T-26 chassis and the modified larger turret of the 1933 version. The design saw extensive use in the Winter War of 1939 and some were still in service during the German invasion of 1941.

The second tank is he KhT-26 Chemical Tank, another design of flame throwing tank. This design was produced in 1933 using the T-26 chassis and a modified turret from the twin turreted version of 1931. Again, they saw extensive use in the Winter War of 1939 and a number were still in service during the German invasion of 1941.

Both models are made from a plastic polymer and comes ready built, all you need to do is add the guns, decide open or closed hatches and whether to add crew and storage. The crew figure has a separate head for better posing. The hull and tracks are one-piece cast in resin, with the turrets, guns, hatches, crew & storage in white metal.

These are very well cast and sculpted miniatures, and very simple to assemble. The overall quality of these slightly obscure tank variants make them well worth a look for those with an interest in the Winter War and early phase of Operation Barbarossa