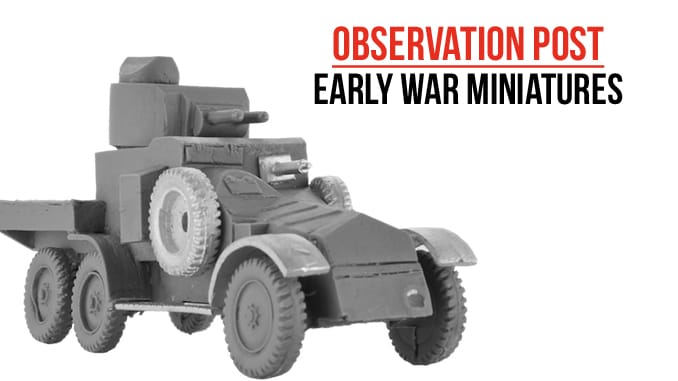 Early War Miniatures are known for offering the familiar and the esoteric in their 20mm Inter War ranges. Two of their latest offerings for the British Army of the 1920s and 30s are the Carden-Loyd 1-Man Tank Mark I and the Lanchester Armoured Car.

The Carden-Loyd 1-Man Tank Mark I was an attempt to put a lightweight, single crew tank onto the battlefiled. Made from 1925 onwards, it was soon superseded by the two-man crew versions, which were adopted by a number of nations.  This is a simple kit with a two part crewman, tracks and ‘turret’ in metal and a resin body.

The Lanchester 6 x 4 wheel drive Armoured Car was used from the early 1930’s up to 1942, including service in the Far East during the Malayan Campaign. It was a more robust vehicle than the better-known Rolls Royce Armoured Car and could operate in varied climates. The kit itself comes virtually ready built in resin, just needing the metal running boards, front mudguards, spare wheels and front machine gun adding.

Early War Miniatures keep to their name by providing one of the most varied ranges of miniatures for the initial part of World War Two, but their Inter War range is worth a closer look for anyone gaming in the far flung corners of the globe.