20mm and 28mm Under Fire Miniatures 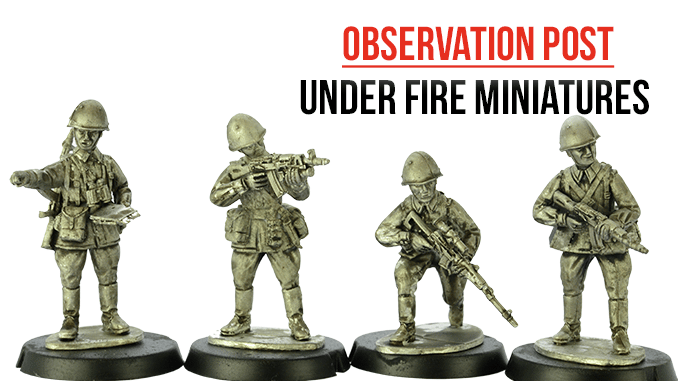 Under Fire Miniatures is a small company who offers a great deal to the gamer. The 20mm ranges cover a number of periods, from the Spanish Civil War and World War Two to the 1980’s in the Lebanon and into the wars of the 1990s and 2000’s. The 28mm range is largely focused upon the 1980’s, with figures representing the West and East German armies, West German police mobilized to defend their homes and Soviet-era Russian Motor Rifle troops acting as invaders.

In 20mm, for the 1970’s in Africa, Rhodesian Special Air Service 1 is three troopers, two armed with AK-47s and the third with an SLR with a Trilux sight. Also included is a Bergen with a stowed RPG 7. These are fully uniformed troops, ready for cross-border operations.

In 28mm, the Russian Motor Rifle Infantry 1: Platoon Command is a platoon command pack, containing four figures. The first is a platoon commander reading a map and pointing in the direction of advance, the second is his radio operator. A third figure stalks though the terrain armed with a SVD sniper rifle, whilst the fourth figure stands and fires the BG-15 UGL attached to his AK74.

These are just two examples of a whole bunch of miniatures of use to a wide range of gamers. Under Fire specializes in those figures that are hard to find or have plenty of character. Kit, uniform and weapon details have been extensively researched and reproduced in miniature. Take a look at the website and see what you can find.