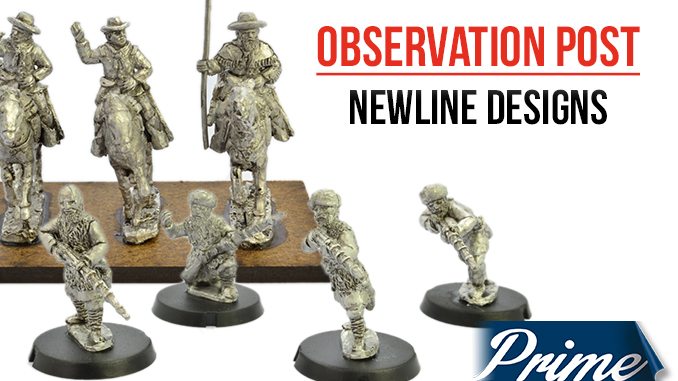 Newline Designs is one of those companies that have been around for a long time but has a great deal to offer the wargamer. With so many ranges, from Ancients to the Colonial, via Fantasy and a few Moderns, in figure sizes from 10mm up to 28mm, it’s hard to know where to start. However, given our theme and a penchant for colonial wargaming, we focused in on two of the many offerings.

In 20mm, Newline have a range entitled Little Big Horn. As the name implies, the range contains troopers and command from the 7TH Cavalry and the warriors of the Sioux Nation who fought in the fields and woodlands around the Little Big Horn in 1876. The 7th Cavalry are presented in mounted and dismounted versions, with typical uniforms and campaign dress of the period, plus casualties and a single figure representing General Custer himself. The Sioux Warriors are in full war regalia, again mounted or dismounted, armed with either hand weapons, bows or rifles. The fact that these are 20mm sized miniatures means that it is possible to present much more of the battle than with larger figures, and these are well sculpted representations of the protagonists.

The 19th Century Miniatures range consists of three sub-ranges, Indians, Boers and Afghans. All three consist of mounted and dismounted miniatures and suitable command packs. The Afghans featured here wear typical tribal clothing for life on the North West Frontier, armed with Jezzails, the long ranged musket favoured by these marksmen, and in active skirmishing poses. The Indian Sepoy’s in the range wear standard Indian Army uniforms, and are armed with Lee-Metford rifles, with the Boers in civilian clothing. Although there aren’t a vast number of packs, the ones available are all useful.

Newline Designs are worth checking out, for these ranges and the others. They are useful to help create large armies at a realistic price. Plus, even the most casual browse would see you finding something of use for your armies.