1979: British Infantry In Flak Vests and Paramilitaries In Balaclavas 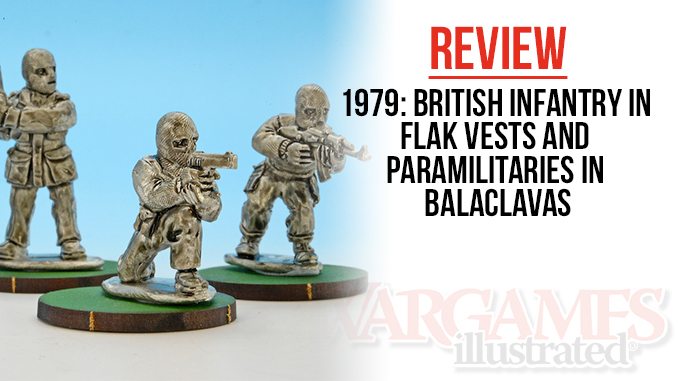 These two packs of figures are designed for use by those gamers looking to create low intensity warfare upon the streets of a Dis-United Kingdom or similar.

Taking inspiration from real world conflicts, we have five British Infantry in berets, M1952 flak vests and wielding 7.62 Self Loading Rifles. They are depicted in patrol or aiming poses and have a lot of character. The second set is four individuals who have chosen to conceal their faces with balaclavas. Two have auto-loading pistols, one has a G3 Assault Rifle and the other has an AK47.

PROS: All the figures are well sculpted, arrived as very clean castings and have suitably realistic poses. They have a touch of character on each one, whether moustaches, facial expression or stance.

CONS: These could be seen as quite a controversial range, given their basis upon a conflict which resonates with many today. However, many ranges of figures have their origins in dubious wars or units when one chooses to analyse it.

SCOPE: These figures can be used as part of the factions for an alternate history setting, as is the intention, or could equally be at home patrolling urban streets or as criminals out to rob a bank.