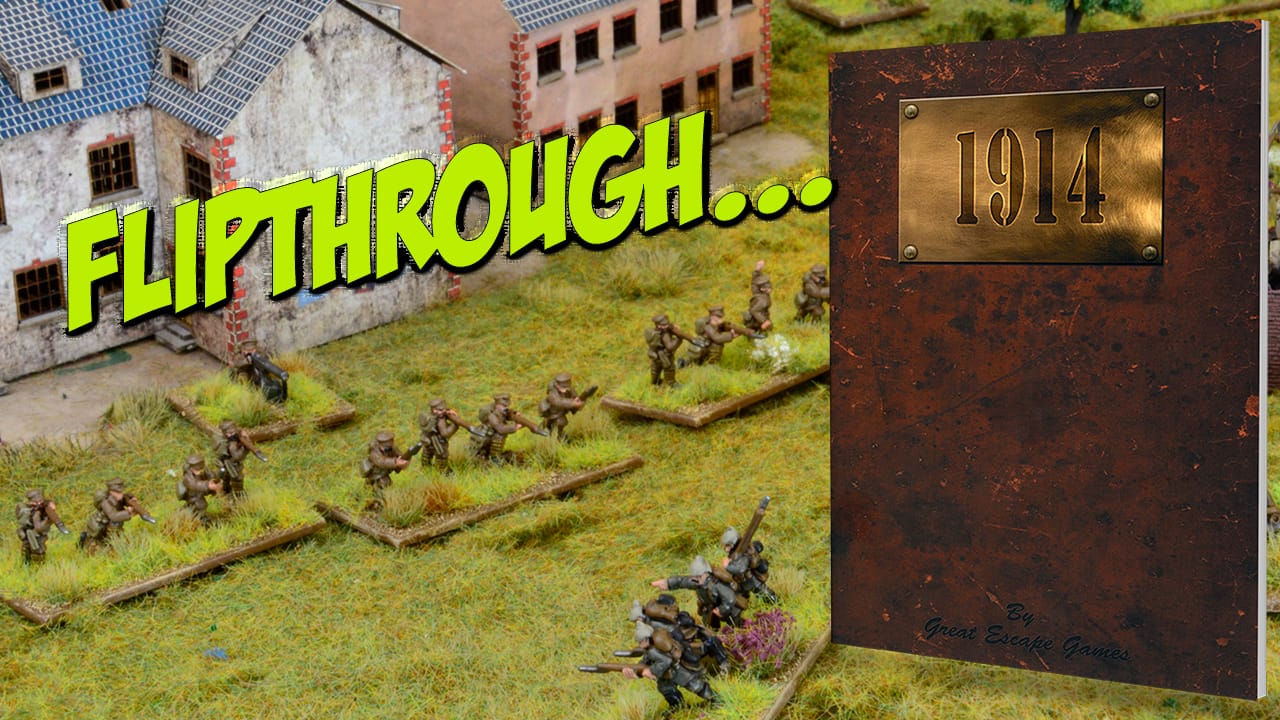 1914 is a set of new rules from Great Escape Games, they cover Battalion up to Brigade level actions during the first few months of World War One. Designed to complement their recently released range of excellent 12mm miniatures, these are fast play rules that provide a real flavour of the ‘war of maneouvre’ at that time.

The rulebook itself manages to do a great deal in 41 packed pages. The introductory section offers both veterans and the new gamer all the basic information they need, including a ground scale. The main function of a key aspect of the game, the command tokens, is explained very well within a couple of pages, and the ‘action /reaction’ aspect offers a look at the method used to prevent players becoming passive participants. This may be an IGO/UGO game, but the ability to react to your opponent’s actions lifts it above similar offerings. The effects of morale and the consequences of losing troops are also important within the game.

The movement section is clearly laid out and simple to understand, as are the firing and close combat sections. All arms are included in the game, plus the usage of machine guns and artillery. A nice touch is the use of machine guns as a separate ‘battery’ within a battalion and the fact that both on and off-table artillery may both be fielded.

In order to simulate the ‘fog of war’, the game uses a number of ‘Tactical Advantage’ cards, which may be played during a turn and against your opponent at any time.

There are some simple but fairly detailed scenario rules, designed to be used for your own games or those provided as generic scenarios. Each Brigade level force needs an order of battle, and the details of how to create these are amply described, along with some samples for the main protagonists on the Western Front, with an Infantry and Cavalry Brigade organisation and points values for each element. A blank Order of Battle roster sheet and a quick reference sheet are available to photocopy at the rear of the book these are also available to download from the company’s website.

This book not only contains all the rules needed for the game but represents each rule very clearly and with simplicity. There are elements of adaptability to other figure sizes, with 6, 10 and 15mm being obvious choices. It may also be possible to use larger miniatures by keeping the action at the Battalion level or using a much larger table. The use of command tokens, simple dice rolls and the cards (which come with the rules) provide fast gameplay but still have the flavour of combat in this period. There are already rumours of a 1918 supplement and the possibility of widening the theatres of operation of the rules, which will hopefully see more of the nicely sculpted and cast 12mm miniatures being released.