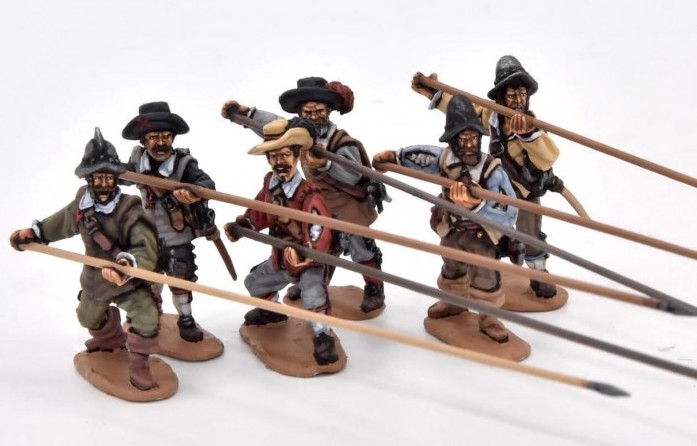 1898 Miniatures have released three more packs of foot to expand their 28mm Thirty Years War (TYW) ‘Spanish’ range. As with their previous releases these would fit well in any European army of the first half of the 17th century, but they have been designed in particular with the Spanish tercios of the TYW in mind.

These three packs are all pikemen cast in dynamic poses as they go into action. There are two packs described as ‘attacking’ (TE13 and TE14) that are in the ‘at charge’ position with pikes leveled at the enemy, actively ‘fencing’ with their pikes. The third pack is described as ‘pikemen receiving cavalry’ (TE15) in the ‘charge for horse’ position with the pike’s butt firmly placed on the ground, braced by the right foot, and the business end of the pike pointed up at a mounted assailant. TE13 are in helmets and armoured, either “back and breast” plates alone, or with “back and breast with tassets”. TE14 are unarmoured with a mixture of helmets and broad brimmed hats.  TE15 are armoured in helmets, once again a mix of back and breast with, or without, tassets. The figures come with separate scabbarded swords and rather sharp wire pikes!

As with 1898’s previous releases these are very attractive miniatures, and with each figure in a six figure pack being different, they will allow interesting looking units to be formed.

The ‘at charge’ packs really look like they are getting stuck in, and with the slight variety to each figure’s pose, you can well imagine them each desperately trying to get a blow in against their opponents. Some of the ‘charge for horse’ figures have their right hands grasping their sword hilts, exactly as required by the drill manual, while some are keeping both hands on the pike, no doubt worried by the enemy cavalry bearing down on them. 1898 have suggested future releases of commanders, artillery and cavalry to round out the Spanish, before moving on to their implacable enemies, the French. These great miniatures are a “must have” for any TYW Spanish army!