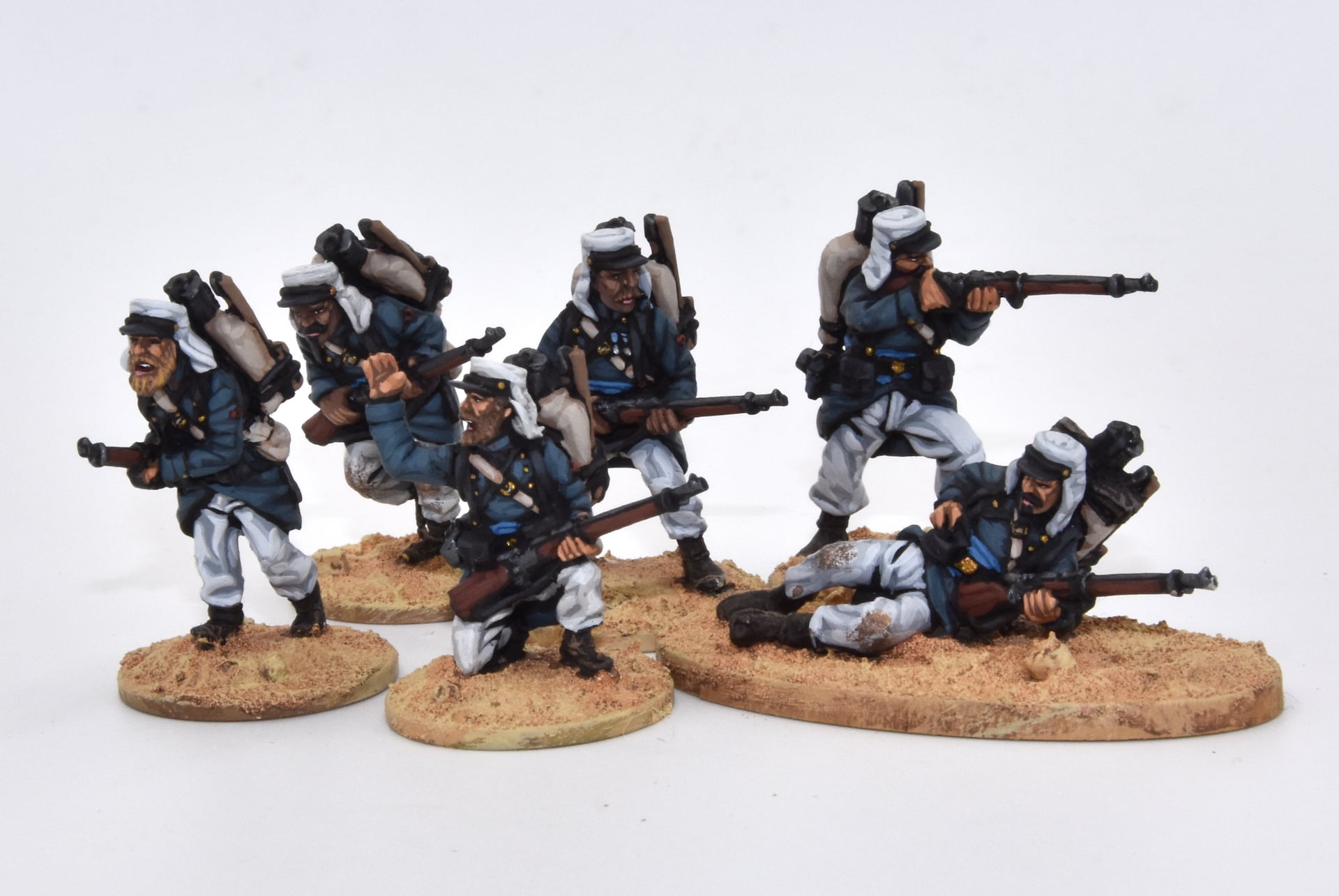 On the review desk are three packs from their French Foreign Legion range. We mentioned Beau Geste at the outset and though that’s certainly the iconic point of reference for the Legion, these models are versatile enough to spread into other French colonial conflicts during the late 1800s and early 1900s, in North and East Africa, as well as Central America. Their FFL garb is desert styled, however, so that’s going to dictate the conflicts you put them in.

In all three of the packs that we got the main figures are metal single-part casts and they have a separate frame of knapsacks that you can add to their backs, also cast in metal.

The models have a clear on campaign look to them – perhaps on campaign for a good bit of time! They are 28mm scale with small, shallow bases cast to their feet. Production quality is good and we found the figures needed only a bit of cleanup. A few rogue mould lines had to be scraped off, the odd bit of flash, and some weapons straightened, but that’s about it. As soon as the primer went on them their details jumped out.

The sets all cost just over £8 ($11.50 US) and that’ll get you four or six detailed figures, depending on what you opt for. Let’s take a closer look.

We seem to have lucked out with this set, getting a duplicate of the bugler. The standard pack is supposed to have only one of each of the four different figures you see above, along with three knapsacks.

These sculpts are a great example of the character that sculptor José Hidalgo has brought to this range. As befits the romanticised vision of the Foreign Legion, this set of figures shows individuals with their own character and personality – a ragtag bunch of misfits – as opposed to the faceless rank and file we often see in other 28mm armies.

They wear desert gear and, thanks to their protective kepi, equipment, and loaded knapsacks, they look ready for a long slog through the North African desert.

The detail is impressive – there are lovely contrasts between the accurate uniforms and heavy gear, faces exude character as they yell orders, and tiny elements such as medals can be seen. Great stuff! Poses are excellent too with these figures directing their troops.

There are six figures in this pack and while some models are similarly posed they each have unique elements, which means you will be able to make a force with some outstanding variety. Some of these Legionnaires have found the time to shave but others are rather hirsute and that feels fitting for them on their long march.

A word on the weapons here – while they look fine we feel they’re perhaps not quite as sharp as we see from other manufacturers. Some of the parts look ‘soft’ where we’d prefer to see right angles and edges. It’s nothing too major but it does stand out against such quality sculpting everywhere else on the figures.

We had to straighten a few of the Lebel rifles too, but this was an easy fix and thanks to the forgiving thickness of the weapons there was no risk of them snapping.

This skirmishing pack offers much variety in the poses of the Legionnaires. There are models in advance, firing from the hip, with their rifle shouldered, and one particularly cool model in a prone position, reaching into a bag to grab more ammunition. This is the sort of variety that any skirmish gamer will love and the whole 1898 Miniaturas Foreign Legion range feels perfect to make a small army where the story plays a part in your battles and campaign.

The knapsacks are bedecked with an impressive amount of equipment and this gives, along with the other gear that is already a part of the main figures, these men a truly weighed down feel. They look like they are pushing on despite the weight of their burden. As with the figures themselves, there are six different knapsacks. There are details aplenty here. There’s the usual gear and entrenching tools you’d expect but also characterful extras like pairs of boots and sticks. We love this sort of attention to detail.

Other figures in the range

There are some more packs in their range, with firing line and marching Legionnaires as well as advancing command. We’re keen on these releases and we can see many gamers finding a place for them in their collection. If you’re still not convinced by the pewter shots then it’s hard to resist the lure of the painted photos that we’ve snagged from 1898 Miniaturas’ website.