1809 Danube Campaign from the Situation Room 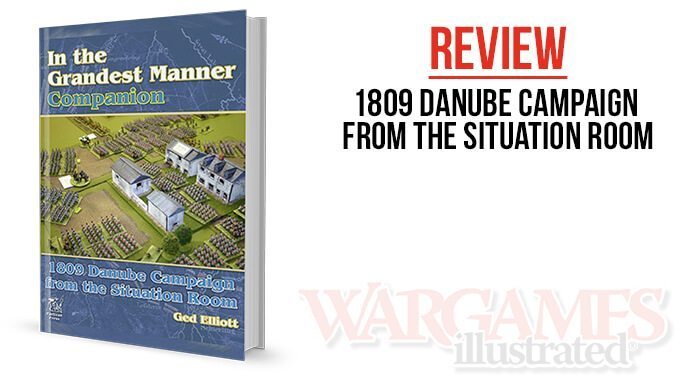 It is 1809 and the War of the Fifth Coalition is under way, the outcome of which will be decided in Austria and ultimately in the Battle of Wagram. With that in mind you might want to take a look at the campaign companion for In the Grandest Manner, 1809 Danube

Campaign from the Situation Room. Authored by GED Elliott and published by Partizan

Press, you get 72 softback pages covering the 4 main battles between Napoleon’s French and Charles’ Austrians. For each battle you get Orders of Battle, maps, scenario rules and a battle report. The introduction mainly deals with setting up for In the Grandest Manner rules and more exploration of some aspects of the system itself, which look useful.

There are many good points about this supplement. The Orders of Battle seem very comprehensive in providing you with the types of units for each Division and the quality of those units. The Orders of Battle also allow you to see how good (or bad) your generals are, and provide the number of figures in each unit (it is targeted at 10mm gaming, so lots!). However, they do not tell you which regiments were present at each engagement, which is a shame given they are all noted – a little extra detail goes a long way. The maps provided are broad interpretations rather than exact replicas, and produced in a grid style, which should make scaling to your taste easier. So, for example, if you want to fight Abensburg on a smaller table, use the map as an 8′ x 5′ board and recreate it with your own terrain. The scenarios also give Napoleon the strategic and numerical superiority that matches the historical reality.

There are a few minor problems. I am not sure the extra rules around Archduke Charles’ epilepsy are needed. These have the potential to remove Charles from the game for up to 11 turns at a time in which case the other Austrian generals are further penalised. This is especially in light of his rating in the book, which seems harsh. He was known as being a good in battle commander: it was strategically where he fell down. In addition, while the battle reports are illuminating, the pictures could do with some better annotation. For example, small notes on the pictures to let you know which Division was which would have been nice.

Overall this campaign book gives you what you want to play the big four battles from the Danube Campaign using In the Grandest Manner. These are designed to be BIG battles (24ft long tables) yet the information is there to make it easy to adjust them to your preferred rules and resources. The supplement provides a decent overview of the forces used and the battlefields, which is a nice reference point. I would say though that they are mainly useful for those that play the In the Grandest Manner rules and want to play big battles over a weekend.