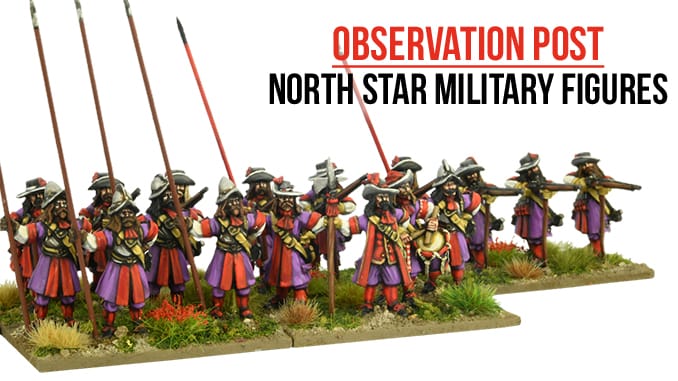 North Star Military Figures have a couple of new packs of Spanish for their 1672 range. Pikemen and Command are joining the ranks of Musketeers. But why should we be interested in late 17th Century Spanish? And what actions were they involved in? We asked North Star boss Nick Eyre to give us a bit of background.

Spain, once the super power of the Renaissance period, was slipping into decline by the 1670s. She was struggling to maintain her overseas possessions, and her European territories were under threat from France, Britain and the Dutch.

The Spanish Netherlands (modern day Flanders/ Belgium), were targeted by France in the War of Devolution, 1667.  It was a series of sieges rather than field battles, sieges that were short and ended with the Spanish garrisons surrendering. But the Spanish held onto most of the territory following a peace treaty in 1668.

France then went to war with the Dutch in 1672. At first the French armies went around Flanders, marching north by the Rhine, to invade the Netherlands. As the initial invasion failed, the action moved into the Spanish Netherlands where Dutch and Spanish armies battled the French.

The Spanish armies of the late 1600s lived under the shadow of the mighty tercios, those Spanish formations that dominated the earlier Renaissance period. By the 1660s and ’70s, Spanish armies fought much like their neighbours. Slowly, pikemen were taking a ‘back seat’, leaving the musketeers (who now were numbered 2-1 to pike) to do much of the fighting while they remained to fend off the enemy cavalry. The Spanish soldier was not inferior to his Dutch or French counterpart, but the forces in Flanders was at the very end of a long supply line. His morale was also affected by the fact he had been recruited in sunny Spain but then stationed in the coldest, wettest corner of the Empire, surrounded by heretics and Spain’s most powerful enemies.