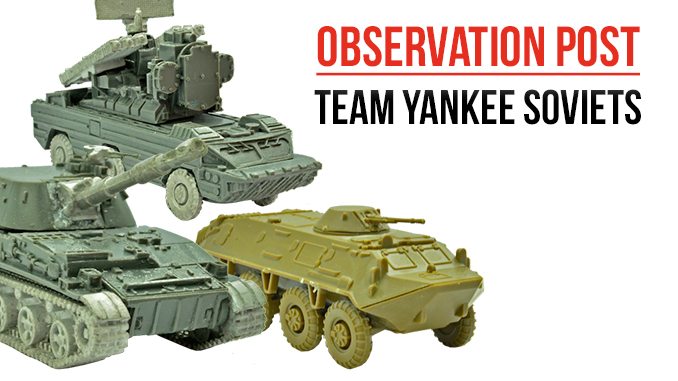 To support the release of Red Thunder, the new Soviet supplement for the Team Yankee game system, Battlefront Ltd. have released a host of new models in both plastic and resin.

The first release is probably the most eagerly awaited, the core boxed set that provides a fair chunk of forces for your gaming. The Yuri’s Wolves set provides five T-64 tanks and two BMP-1 or BMP-2 Scouts, enough to lead the charge into action. All the kits are plastic, and come with optional tank commanders. You also receive all the relevant unit cards, a decal sheet and even a mini Team Yankee rulebook.

Of course, with the beginnings of a strike force, it makes sense to add some support units. The set consists of five BTR-60 armoured personnel carriers, complete with the usual commander figures, unit cards and a decal sheet. This smaller boxed set of plastic models provides transport for the inevitable infantry units but also packs a punch with a 14.5mm machine gun in its turret and a 7.62mm machine gun to engage infantry targets.

To punch through NATO forces, having mobile artillery support is a must. Our next boxed set consists of resin and metal parts that may be assembled to create three 2s3 Acacia Self-Propelled Howitzers, which come with those handy unit cards.

Lastly, to aid against air attack, we have another resin and metal kit, this time enabling Soviet commanders to field two SA-8 Gecko Surface to Air Missile launchers. Able to use its radar to detect and engage enemy aircraft, there is one unit card in the box.

These four boxes worth of models are a perfect starting force for those looking to field a different type of force for the Soviets and their allies. Of course, once you start, you’ll want to add more, so keep a look out for the next wave of releases coming soon from Battlefront Ltd.