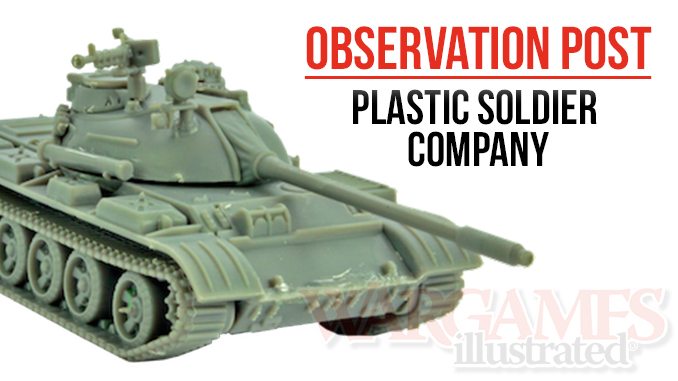 The prolific Plastic Soldier Company have added to their range of plastic kits but have moved beyond World War Two. Their latest release is a box of five of the same sprue that enables you to create five T55 Soviet tanks.

There are also enough parts on the sprues to build the T55A or the T55AM2. The T55A had increased Nuclear, Biological and Chemical defences, whereas the T55AM2 was produced for export.

Assembly is fairly simple and it wouldn’t take too long to put the whole box worth’s together. Once assembled, the hard plastic seems like it would take paint very well, with brush, spray or airbrush all being an option.

This kit would be useful for any gamers using 15mm sized miniatures for their Cold War-era or modern gaming. There are also plans to produce a 20mm version of the same boxed set. There are confirmed rumours of a series of Cold War Gone Hot rules, using the Battlegroup system from Iron Fist Publishing, being released at some point in the future. It is perhaps therefor safe to say that this is probably the first in a series of related releases from PSC.