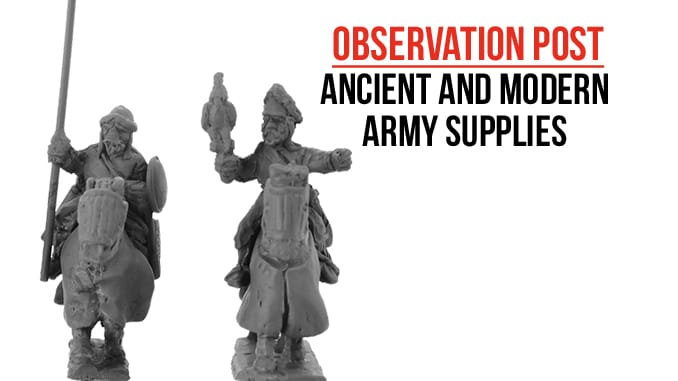 Ancient and Modern Army Supplies have continued to produce new 15mm miniatures under the Donington ‘New Era’ banner. The latest releases are a new range, entitled ‘Armies of Islam’.

The pack featured here is a command pack, a Senior Turkish or Early Mamluk Commander. There are three riders and three horses in the pack, along with shields, a horn and a banner topper, plus a piece of copper wire to form a standard. The horses have flowing caparisons, with some obvious armour, and the commander figure wears full armour. The standard bearer and trumpeter have less armour but are obviously important men.

The horses have a nice sense of animation, with two walking poses and one trotting. The shields and banner toppers are well-sculpted, especially considering the scale. Also included in the range are a number of sheets of high quality banners which may be fixed to the banner poles provided, complete with full flags and pennants.

This new range consists of over 50 mounted and 40 foot figure codes (most with multiple poses) including: Character figures, Bedouins, Murabits Berbers, Moors and Saracens, Andalusians, Arabs, Nubians, Negroes and Sudanese, Mamluks, Syrians, Seljuks, Ghulams, Turcomen, Dailami and Naffatun. The introduction of such a varied range in a scale that just begs for massed armies is an excellent move for the company, and shows the continuing commitment to produce top quality products which compliment what already exists.