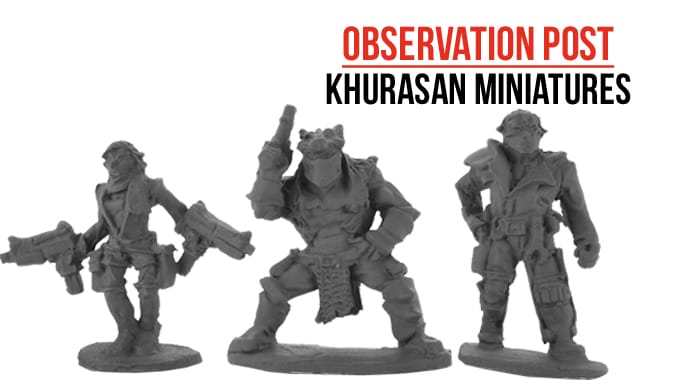 Khurasan Miniatures sell some of the best and most eclectic ranges of miniatures for the 15mm market.  This time around, we’re taking a look at their ‘End Times’ range, a set of characters designed to inhabit any number of post-apocalyptic scenarios.

First of all, we have the Mutant Supersoldiers. These are larger than average 15mm figures, and are available in sets of three figures. This is Mutant Supersoldiers Set 1, which contains one overly muscled mutant with a large Warhammer, one with a shotgun and the last one with an AK47. Each figure wears crude shoulder pad ‘armour’ and bear more than a passing resemblance to Orkoids.

The next figure is a Skunkeater, a hybrid cross between an alligator and a bear. The figure comes with a choice of jaws, including one where a large, reptile like tongue has just caught an unfortunate skunk!

The last three are character miniatures, available as individual castings. We have The Highway Soldier, Malice and King Redwolf. All three bear a passing resemblance to archetypal heroes and villains of the Apocalypse, and offer the opportunity to portray the same on the tabletop.

These are really characterful, very well-sculpted miniatures, and would work with any system which embraces the post-apocalyptic genre. Khurasan have many more ranges on offer for both historical and sci-fi periods. Although most are in 15mm, there are also a few 28mm figures, and the whole website offers something for every gamer.