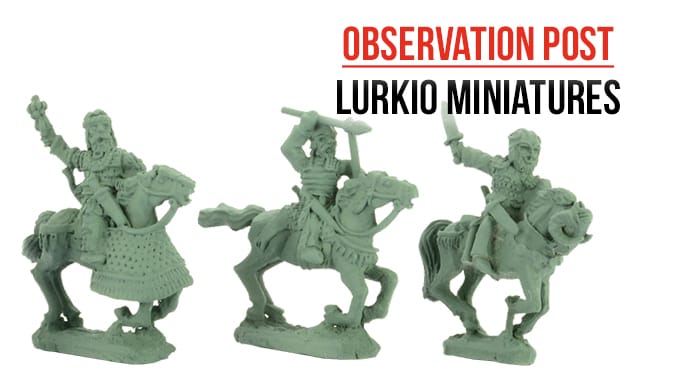 Lurkio Miniatures is one of those small, ‘one-man bands’ that are the lifeblood of the wargames industry. Rather than churning out the cookie cutter core products of the large companies, Lurkio aims to offer 15mm miniatures that aren’t often available elsewhere.

The first offerings fit into the Ancients period, part of two packs of Scythians to be precise. Available in packs of twelve, we have examples of four Heavy Cavalry and four Horse Archers.

The four Heavy cavalry consist of two figures with plenty of armour for themselves and their mounts, plus two more lightly armoured riders. Armed with lances or hand weapons, the overall level of sculpting on these fairly ‘chunky’ looking figures is of a high standard. Armour, equipment and shields are all rendered very well and the quality of each casting is very good.

The Horse Archers are equally well done, with their light armour and slung bows. A couple of the figures are carrying gruesome trophies from their victories, with severed heads tied to their saddles. These are nicely animated figures, with a sense of wildness conveyed by the poses of horse and rider. A particular favourite is the command figure, wielding a rope to perhaps ensnare his target.

The next set of miniatures takes us forward in time to the late Victorian period and the green fields of England. These are British infantry in the 1897 Home Service uniform, ready to defend the UK from foreign invaders, domestic insurrection or visitors from beyond the stars.

Interestingly, although they wear the correct uniform and equipment for the period, they are armed with the Martini-Henry rifle, which makes them useful for earlier parts of the Victorian age. The quality of sculpting and casting is good here, with some nicely defined details such as the badge plates on the helmets.

These 15mm figures would be suitable for a whole number of rulesets and settings, and have enough attention to detail to satisfy most wargamers. They are also good value for money for such quality products. Other figure ranges from Lurkio include Nikephorian Byzantine, 9 Years War and South America, showing that the smaller the company, the greater the variety.