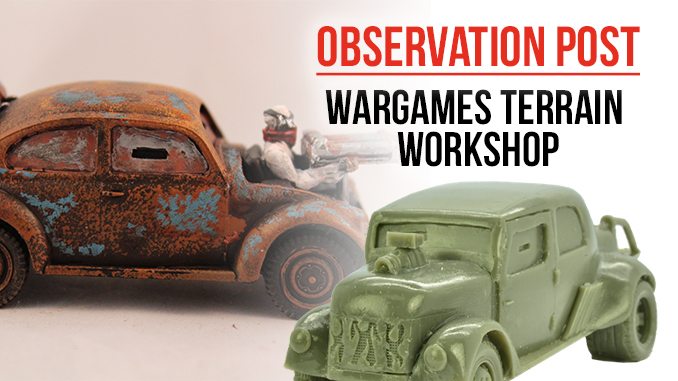 Wargames Terrain Workshop has produced some useful vehicles for those looking to add a touch of the Road Warrior to their PA gaming.

Sent for review are three different vehicles that have been given a PA ‘bent’, in the case of one, quite literally!

First of all, we have a large, super charged 1940 – 50’s American vehicle which has armoured windows, external tailpipes and a trunk which has been turned into a platform for someone to stand upon. A particularly nice touch is the flame motif on the radiator grille.

The second vehicle is a Volkswagen Beetle, again with armoured windows and what looks like a long-range fuel tank on the back. However, the trunk has been converted into a firing position for some form of volley gun, perhaps powered by compressed air. The seated gunner figure is cast onto the seat but the gun and firing arms are a separate piece.

The last vehicle could only be used as a piece of terrain, representing as it does a vehicle which has obviously been crushed from the roof down, perhaps as the result of a rollover or similar accident. It could double as an objective marker – who knows what treasures could be found within? Perhaps the engine can be stripped out for alternate use or the fuel tank contains the precious ‘juice’?

These are cleanly cast resin vehicles with some nice details. The joy of this smaller company is the chance to furnish gamers with a whole range of different or quirky items that others don’t always produce. If you’d asked me whether I needed a VW Beetle with a gunner’s position a few weeks ago, I would have said no, but, of course, now I’ve seen this one…