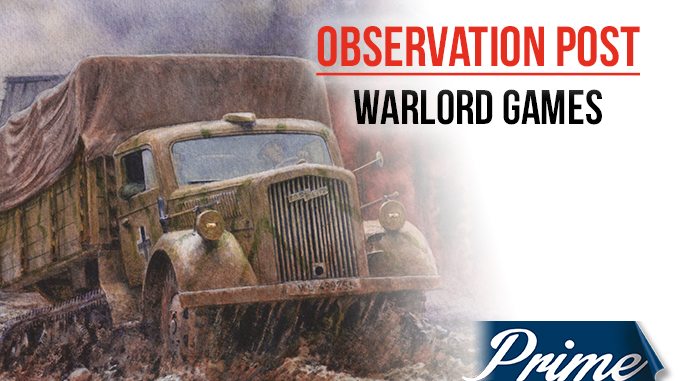 Any force created for use with World War Two rules should have a balance between infantry, armour and support weapons. However, it should also include transport vehicles, with one of the most used being the truck. Warlord Games have produced a plastic kit of the iconic German Opel Blitz and have added a wealth of options to create a variety of styles.

The kit itself is very simple to put together but the options on the frame provide for some useful decisions. Having assembled the basic cab and chassis, complete with a driver figure with optional heads, there are options to create a standard wheeled version of the truck or use the components included to create the ‘half-track’ version. This latter version is known as a ‘Maultier’ and was designed to deal with the winter battlefield conditions on the Eastern Front.

Once that decision has been made, you can then decide upon whether you are going to use high or low side panels. With the high panels, you can add an open or closed canopy, which can be modeled with rear panels open or closed. There are also benches that may be placed in the open version of the vehicle, plus detailing parts such as tools, fuel cans and more that can be added. A really nice touch is the inclusion of a sheet of acetate which allows you to add a windshield and side windows to the cab, something I’ve not seen before in a Warlord kit.

In addition, this is the first model kit to include the new passengers frame, allowing you to add seated soldiers in the transport portion. These come with conjoined torsos and separate legs, plus optional heads and weaponry. Careful choice of headwear allows you to theme your German soldiers around your force selection, so perhaps more field caps for your Afrika Korps, covered helmets for late war Heer or SS units or a mix for almost any front. The conjoined figures may be carefully separated, allowing them to be used in a less regimented fashion.