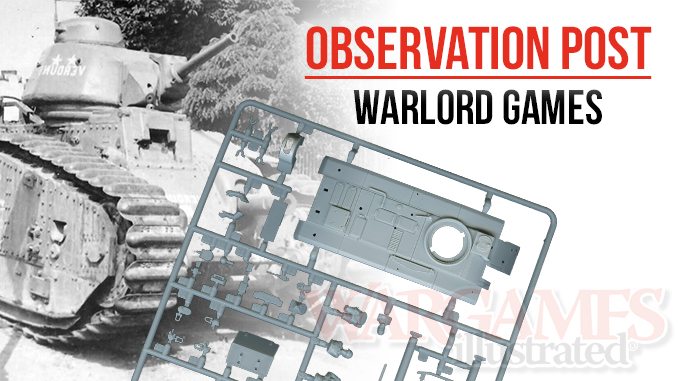 Warlord Games have once again converted a resin vehicle into a plastic kit, this time producing an early World War Two tank for use with the French forces in 1940.

The Char B1 bis was a medium tank that was first conceived as being a ‘breakthrough’ vehicle, in the World War One style. Later, a turret was added to make it more of a ‘battle tank’, resulting in this AFV being pretty well armed for the time. A 75mm gun was mounted in the hull, with a limited traverse. However, the turret provided a 47mm weapon that could be turned to face any oncoming enemy. With its fairly thick armour, the tank proved a tough nut to crack for the German forces during their invasion of France in 1940. However, the tank had a high fuel consumption and poor maneuverability, which were a disadvantage due to the fluid nature of Blitzkrieg-style warfare.

The kit itself consists of two sprues, and follows the easy assembly concept seen across the Bolt Action range. There are very few options on the sprue, but that reflects the tank itself, with the B1 bis being the main production variant. There are three crew figures provided with the kit, allowing for the option to perhaps field a command vehicle or distinguish between members of a platoon.

Although this is a French tank, many were captured by the Germans and used in a range of roles, including being armed with flamethrowers. Indeed, some were still around in 1944 during the D-Day invasion.

All in all, this is a good quality wargamer’s model kit with enough detail to pass muster on the tabletop. It’s good to see more early war items coming from Warlord and that the quest to convert what exists in resin to multi-part plastics continues. A useful kit that will no doubt please a number of Bolt Action gamers.