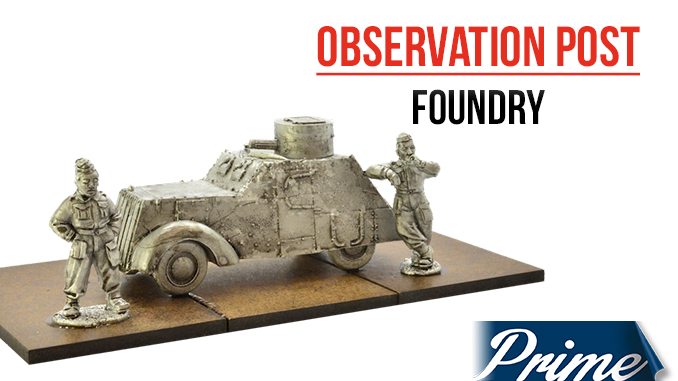 Foundry continue to release and re-release many of the miniatures that they once stocked or find amongst their master castings. Their range of 28mm World War Two figures contains a number of familiar looking Home Guard heroes and more, now with additional support in the fight against German invasion.

The armoured car is an all-metal kit, based upon an improvised design. In the dark days of 1940, a number of vehicle chassis’ had armour plate bolted onto them. This particular vehicle sports a turret with a Vickers machine gun, and comes with two particularly nonchalant looking dismounted crew.

The kit itself is simple to assemble, although there are a few small parts. Given the subject matter, this is a good wargames quality piece, which is also pretty robust. However, rather than being a solid chunk of metal, the main chassis has been hollowed out to cut down on weight.

As a complimentary piece to the Home Guard range, this is a useful addition for those gaming Operation Sealion scenarios. It could also feature in other games, perhaps as a member of a Very British Civil War force or a pulp-era adventuring group.