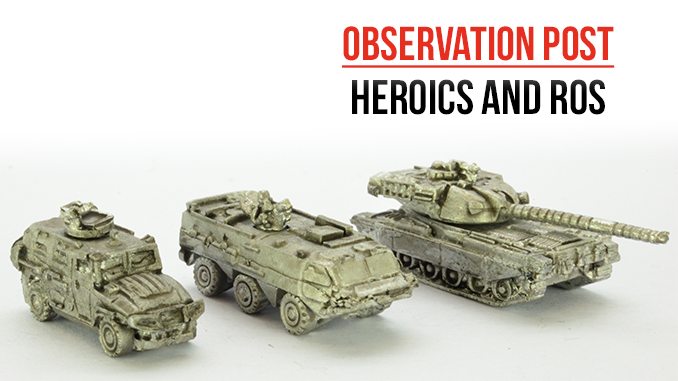 Heroics and Ros will not be a new name to those who game at 1/300th scale or 6mm size. However, what is new if that the current owners have continued to build upon the ranges and add even more to the array of modern era offerings.

Although many of the miniatures from the ‘Modern’ ranges available have been re-molded, many others have been re-sculpted to provide new or better variants. In addition, there are new vehicles being added to them all the time. The pace of warfare hasn’t really changed, and new solutions to old problems continue to be offered. We picked out three of our favourite items sent for review but a perusal of the company’s website shows that there are hundreds of different items on offer.

The venerable Chieftain tank shown here had additions such as ‘stillbrew’ armour to ensure its increased survivability against more advanced munitions. Because of this and other innovations, the Chieftain did sterling service right up until the 1990’s.

The Patria or Sisu Pasi is a Finnish designed and made APC with six wheels. It is still in use across the world and has featured in a number of conflicts.

The Russian Federation continues to add to their arsenal, with wheeled, light armoured vehicles such as this GAZ Tigr with grenade launcher.

With these three miniature vehicles alone, we have covered the late 1960’s all the way up to the 2000’s. All are well rendered versions of the originals, with some excellent detail which would put larger versions to shame and are all instantly recognizable. Heroics and Roz also cover most of the conflicts from World War One onwards, plus they produce a range of figures for others such as the ACW. A website that is well worth a visit and a show stand manned by enthusiastic and knowledgeable staff.