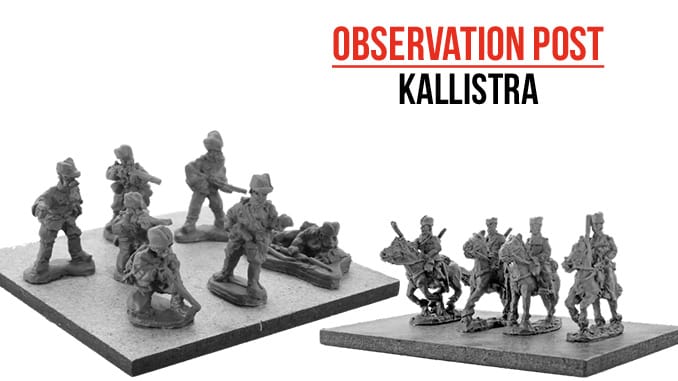 Kallistra Ltd. have diverse ranges of miniatures in 12mm that cover a number of periods. Two of their largest ranges cover the Early and Late periods of World War One, including some of the lesser-known nations.

One of the latest additions to the Early War range is the Serbians. Consisting of Infantry, Cavalry, Heavy Machine Guns, Artillery and Command figures, these are available in packs which contain various amounts of figures. The Infantry packs have both Advancing and Firing sets available, with 32 figures and 4 bases in each pack. Machine guns have 6 guns and 6 bases, cavalry packs have 16 figures and 4 bases and command packs have 25 figures.

There are also field gun and limber sets, horse holders and mounts and a casualties pack. Overall, there are enough figures to make a sizable force simply by buying one of each pack, so the larger your army desires, the easier it is to make a force.

Kallistra figures are all very well sculpted and offer something different to the market. Although they are 12mm, they blend reasonably well with 15mm figures, especially the guns and similar.