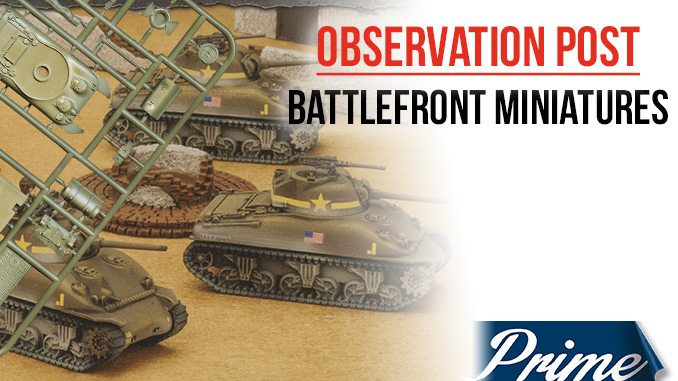 Having recently released the Fighting First supplement for use with Flames of War V.4, Battlefront have followed this up with the first mid war tank release for the US forces in plastic.

The box contains five identical frames that allow you to create a ‘platoon’ of M4 Shermans, the A1 version with a 75mm gun and a .50 calibre machine gun. Each frame contains the option to create an M4A1 with or without a mantlet, comes with some additional stowage and also has a set of sand skirts. The sand skirts are more appropriate for M4s in British service. These are the ‘cast hull’ Shermans with a more rounded hull than previously.

The kit itself is simple to assemble, although there are a few small parts. The level of detail is pretty good for what is designed to be a wargaming piece and there are some standard options, such as turret hatch open or closed, plus some stowage and tools. The one piece track assembly adds to the ability to get the vehicle finished and onto the table as rapidly as possible.

The kit also comes with a frame of tank commanders, decals and all the relevant data cards to field the platoon according to the force organization in the Fighting First supplement. Those looking for a way to field a 15mm US force for North Africa and beyond would do well to take a look at this boxed set.