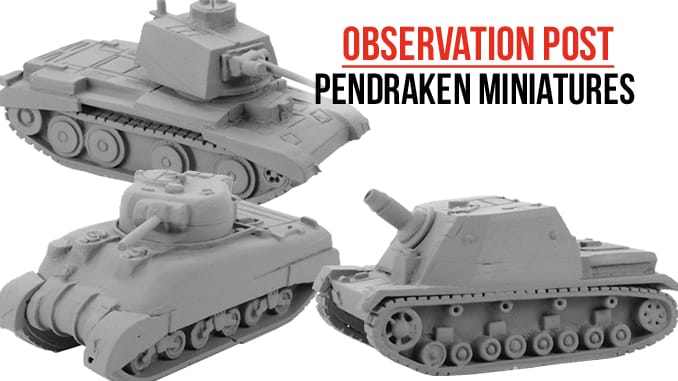 Pendraken Miniatures continue to produce some excellent 10mm armoured vehicles from a number of eras. Sent for review are a number of these, from which we have chosen just four examples.

Firstly, we have two generations of ‘British’ tanks. The first is pack BRV8, an early war A13 Mark I / Cruiser Mark II armed with a 2-pounder main gun and a Vickers machine gun. The second is pack number BRV32, a M4A2 Sherman from the mid-war period, a British version of the American design, with a 75mm gun and a turret back box.

The next tank is a late war German design, pack code GRV87, a Brummbar self-propelled infantry support gun, known by the Germans as a Sturmpanzer. This is an armoured superstructure on a Mark IV tank chassis, with a 15cm SIG 33 gun.

The last AFV is pack code MDV61, this time a French designed armoured car, the Panhard AML 60. This vehicle saw service all over the world from 1959 onwards, being superseded by later variants such as the AML 90 and used by a number of different militaries.

These are excellently sculpted miniatures from a company who has taken the time to get it ‘right’. They also produce miniature figures for a host of other periods in a figure size that allows for those big battles many crave.