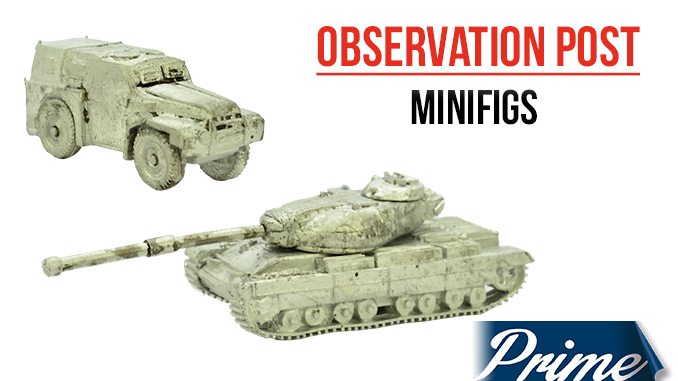 Minifigs continues to support its 10mm Cold War, releasing armour, APCs, support vehicles and infantry for a host of nations.

The most recent releases are the Ferret Mk1, the Humber Pig and the Conqueror heavy tank for the British, the West German HS-30 forward observation vehicle, the Chinese YW-531 APC and the T-62 Soviet / Warsaw Pact tank.

The majority of these releases were in operation from the 1950’s and 1960’s, although some vehicles like the T-62 can still be found serving with some armies in Africa. The whole Minifigs range of 10mm Moderns covers all the way up to the 1980’s, allowing gamers to create various forces that encompass the ‘classic’ Cold War era.

The Conqueror heavy tank was developed in response to British fears regarding the Soviet IS-3. Armed with a 120mm gun, the Conqueror was heavily armoured and designed to support the frontline Centurions. With the British Army of the Rhine deployed in post-WW2 Germany, each armoured regiment was allocated nine Conquerors in order to defend against potential Soviet attack.

The second vehicle is a Humber Pig, an armoured four-wheel drive truck which saw most service with the British Army and Royal Ulster Constabulary during The Troubles in Northern Ireland. It transported men into dangerous areas safely and could be used in the event of riots or other incidents.

The whole range of miniatures from Minifigs covers a host of nations. The vehicles come in single figure packs, whereas the infantry figure packs have around 20 or more miniatures. If you’re looking to wargame the early or late Cold War era in a figure size that leaves you with discernible models, this could be for you.