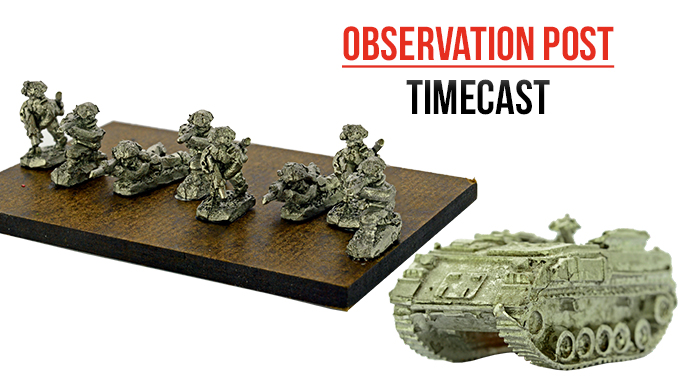 Timecast, the company with a whole host of 6, 10 and 15mm resin buildings and terrain, have recently branched out with their own range of miniatures. These are themed around British and Soviet forces for a mid-80’s World War Three scenario.

The infantry figures are easily distinguishable from each other, thanks to the sculptor’s decision to add the iconic ‘scrub and grass’ to the helmets of the British infantry, plus such recognizable details as the ’58 Pattern webbing. The pack sent for review, BR 2, consists of 8 figures with SLR in three poses, advancing, kneeling firing and prone firing. The advancing figures each carries what appears to be a 66mm LAW as part of their kit.

For the Soviets, the pack chosen for review is SMR 9 and represents two 120mm mortars complete with 4-crew for each. The Soviets are dressed in the type of kit worn by such crews, and are depicted ready to load fresh ammunition or preparing to give the order to fire. A nice touch is the inclusion of a radio operator. This is just one of the specialized packs for each side, which also includes anti-tank teams, machine gun and anti-aircraft support weapons, engineers and command teams.

Also received for review were two armoured vehicles. One is a Soviet BMP-1 Infantry Combat Vehicle, which has the trademark 37mm cannon in a turret and the option to add either an AT-3 or AT-4 launcher. The other is a FV-432 Mortar Carrier, with a 81mm mortar which slots into the open back of the vehicle. Again these are just two vehicles in the range, which includes Main Battle Tanks, Recce vehicles and a variety of others.

Both the figures and the vehicles appear well sculpted and are very cleanly cast. The number of codes on offer is fairly high, with more planned, and some good deals on platoon and company packs. They are well worth checking out by those looking for something larger than 6mm but not wanting to expand into the expense of 15’s.