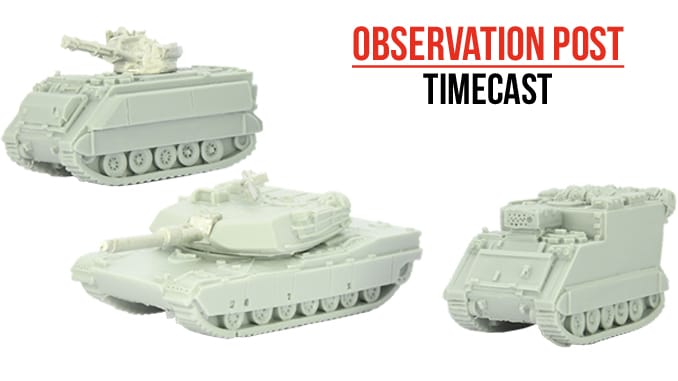 Timecast have added the United States forces to their Cold War ’84 range. In addition to infantry figures, they have added variant on the M113 APC and the early version of the M1 Abrams heavy tank.

Received for review were four packs. At the top of the armoured vehicle ‘pile’, we have one of the kings of the battlefield. The M1 Abrams was the main battle tank of the US Army and Marines as of 1980, and was followed by two variants, the M1A1 and the M1A2. Fast, heavily armed and heavily armoured, it has proven to be a deadly opponent on the battlefield.

The M901ITV (Improved TOW Vehicle) is a variant of the basic M113 chassis. It sports a dual tube TOW ant-tank missile launcher and is used to engage enemy armour from ambush or on the move.

The M163 VADS is a self-propelled anti-aircraft vehicle. Armed with a rotating barrel weapon, it was designed to keep pace with other vehicles and protect them if attacked from the air.

Finally, we have the M577, a tactical operations vehicle which contains a host of electronic communication equipment and has a raised roof to fit more inside.

These are all resin cast vehicles with some metal parts. They are excellently sculpted and cast, with some great attention for detail for this scale. Well worth a second look, and in a perfect scale for those wanting space to game on the table but unable to cope with smaller scales.