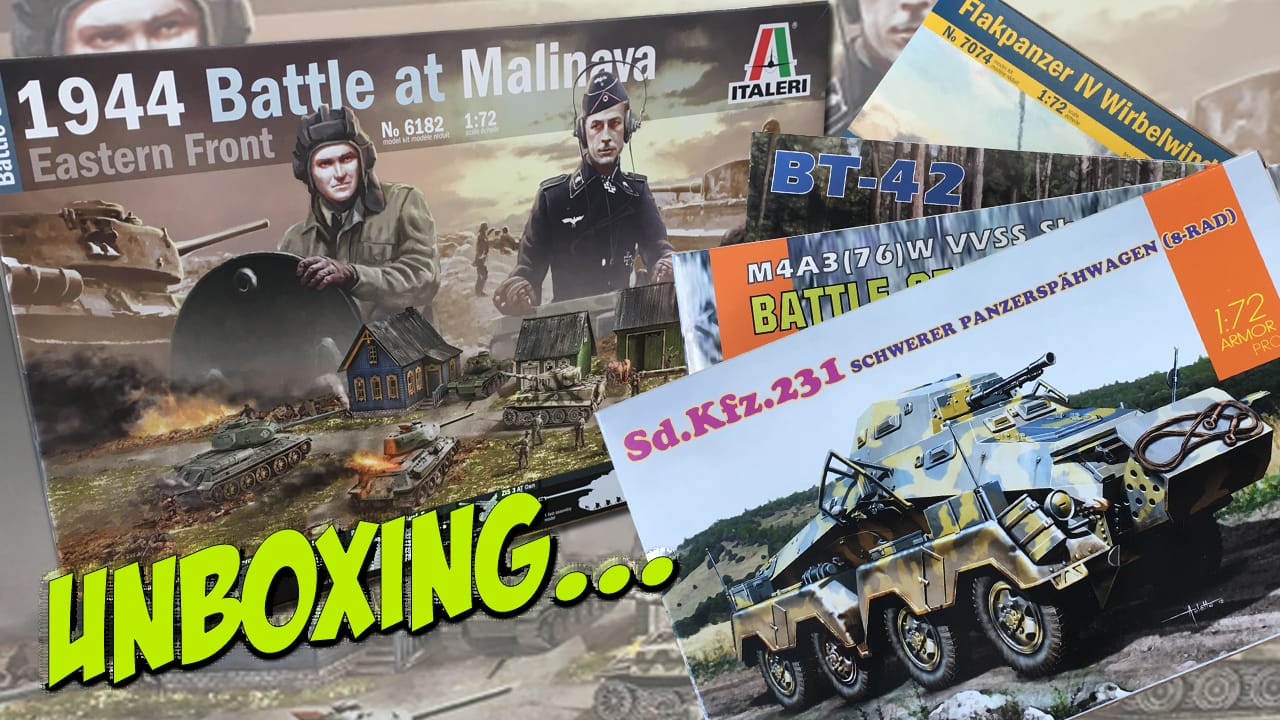 Hobby Co. Ltd. have once again very kindly sent us a number of kits to review. This time around, we have three Dragon kits and two Italeri kits to talk about, all themed around World War Two.

The three Dragon kits are from the Armor Pro series. We have a German Sd. Kfz. 231 armoured car, a Soviet BT-42 tank and a M4A3 (76) W VVSS Sherman for use by US forces during the Battle of the Bulge. As you would expect from Dragon, and the Armor Pro series in particular, these are highly detailed kits with a number of finely tooled parts. The tracks on the two tanks are one-piece parts from DS, helping with a bugbear of mine. The construction process is thorough and there are two barrel options for the Sherman. The BT-42 has a single piece turret, which aids with assembly, and the Sd. Kfz. 231 has a fully detailed chassis. They are great models but may be lacking when it comes to tabletop usage, with some fragile parts. Paradoxically, I for one would not want to skimp on the stages of construction to produce a more ‘wargaming’ version. The wealth of detail and extras that are designed to be added are very well done and the kits wouldn’t look ‘right’ without them. These are the type of kits that you put together, add paint and decals and then base in such a way that you don’t have to touch the model ever again for fear of damaging the details.

In contrast, the Italeri kits are detailed but are more suitable for prolonged battlefield usage in wargaming. In fact one of them, the Flakpanzer IV Wirbelwind, has the legend ‘Wargames Approved’ printed on the box! There is still plenty of extra detail here and some fine molding, although the tracks are hard plastic and multipart, needing to be placed carefully on the sprockets and road rollers. The construction steps are carefully explained, and you can easily miss out some of the detailing stages to produce a more ‘wargaming’ version, which would not detract from the end result.

However, the last ‘kit’ is probably of most interest to gamers and is well worth the investment in terms of money and time. This is the latest ‘Battle Set’, themed around the Eastern Front Battle of Malinava in 1944. It’s a late World War Two gamer’s dream really, a 1/72nd / 20mm gamer’s ‘dream’. First of all, there are two Pz. Kpfw. VI Tiger 1 Ausf. E kits in the box, facing off against an IS-2 and T-34/85. That’s four heavy duty tanks for German and Soviet players to use, with all four being designed for ‘fast-assembly’, which means minimal parts and no real extras to get damaged or be added.

The Germans and Soviets are also represented by non-vehicle additions. There are 50 soft plastic German Infantry, a Soviet ZIS 3 Anti-Tank Gun and 48 soft plastic Soviet Infantry included in the set, giving you two reasonably balanced forces. But, for me, the icing on the cake for any wargamer are the three Russian themed MDF laser cut buildings included in the box, two typical Russian Isba farmstead houses and a Barn, all designed and produced by the excellent Sarissa Precision. The troops are simple clip, base, paint and play, whereas the building needs some assembly and painting, but overall these are fairly easy to make the most of (as shown by Gary Faulkner, whose articles have featured in Wargames Illustrated).

Al of these kits are excellent and well worth a look for those after something different in this scale. However, as a wargamer, the Battle Set is probably the best option, especially for those wanting to create a core force or encourage new or veteran gamers.