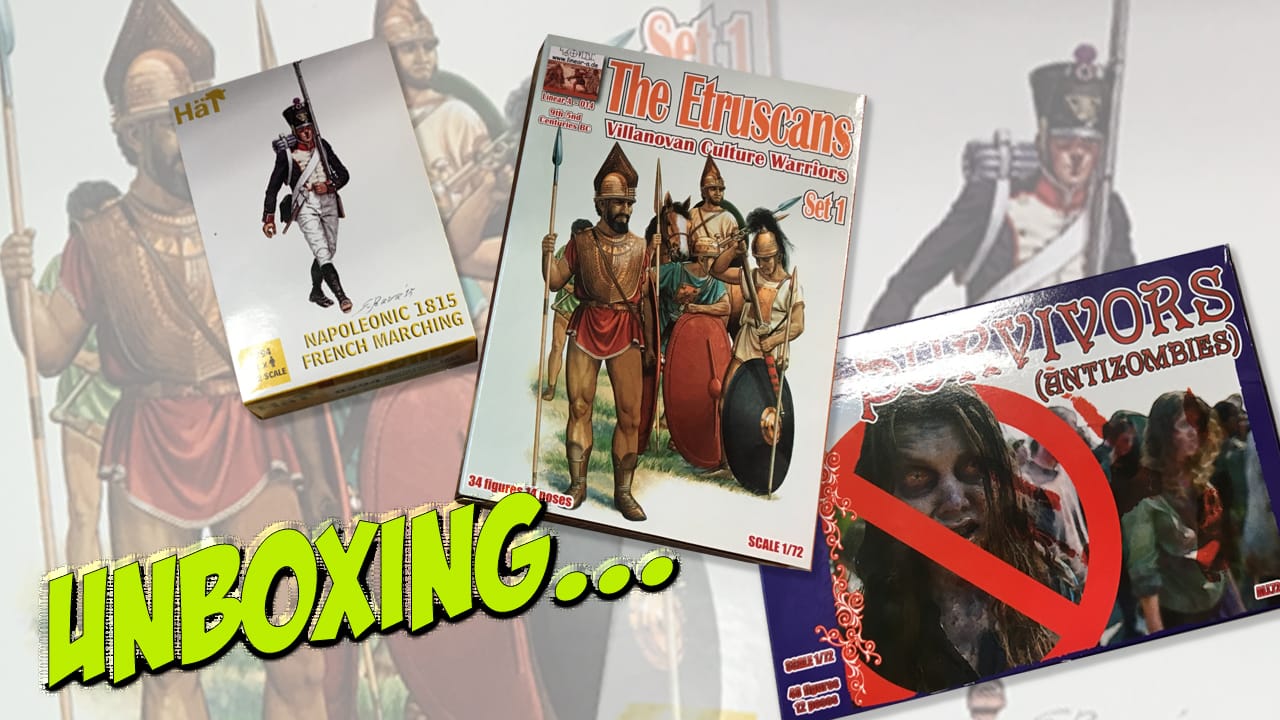 Something a little different, thanks to our friends at Drum & Flag. This is just a selection of the new and upcoming products from a number of companies who produce the 1/72nd plastic figures. These figures offer such value for money for those looking to try out a new period or are looking to create the huge armies needed for tabletop use.

Hat 2924 – Napoleonic 1815 French Marching – 24 figures in 6 marching poses for £4.50 per box. Includes 4 fusilier poses with the other 2 poses representing the Grenadier & Voltigeur elites. Backpacks are separate and plug in. There are also 3 spare heads on each of the 4 identical sprues for conversion options. This set continues HaT’s welcome initiative of releasing some of their figures in distinct separate pose types – in this case Marching. Also released at the same time in the same style small box offering are 3 other long awaited French Napoleonic sets: #8234 French in Greatcoats, #8297 Napoleonic Early – Mid French Marching (1805-1812) and #8297 French Command. Happy days for 1/72 scale Napoleonic enthusiasts.

Linear-A (Code 014) – Etruscans (Villanovan Culture Warriors) Set #1 – 34 figures in 14 different poses for £11.99 per box. This set covers the 9th-5th Century BC and features a small command sprue of 4 figures plus 3 identical warrior sprues each of 10 different poses. The four command figures are a standard bearer, Flute Player, Trumpeter and Commander. The warriors include an archer and an assortment of troops armed with various hand weapons including spears, swords and axes. All poses are helpfully illustrated in painted form on the back of the rather nice box. Set #2 is in the works I believe for a later release and will be cavalry.

Dark Alliance Set #ALL72038 – Survivors (Anti-Zombies) – 48 figures in 12 different poses for £7.99 per box. Dark Alliance released a couple of popular sets of Zombies a while back and now it’s great to see some opposition for them in the form of these Survivors armed with a wide variety of weapons. These ‘Anti-Zombies’ were released at the same time as three other related sets that feature the same figure & pose count and sell at the same price point. These other sets being Stalkers Set #1, Stalkers Set #2 and ‘Rednecks’. Let the fight back against the Zombies commence!

With such a huge variety of plastic figures at this scale and others, we can only take a snapshot of those available on the market. However, we’d welcome the opportunity to feature similar miniatures in the future, either through Drum & Flag or direct from interested manufacturers.