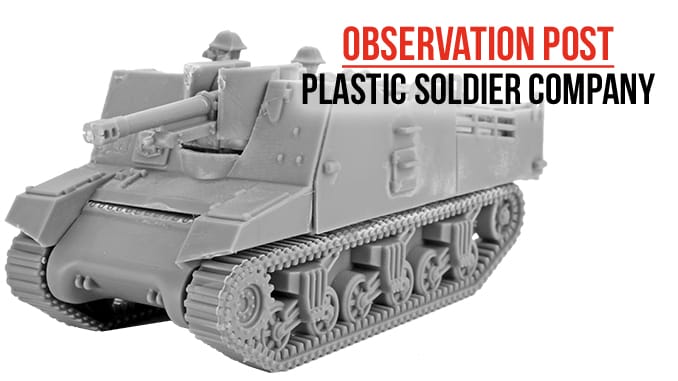 Plastic Soldier Company have once again re-sized one of their kits from 1/100th to 1/72nd. The Sexton Self-Propelled Gun was a mobile artillery piece intended to keep pace with the armoured formations it was designed to support.

The box contains 6 frames, with enough parts to create 3 of the same vehicle. These are the Mark II version, with optional elements to create the early or late war variants. When assembling the models, it is important to maintain a sense of ‘continuity’ – the early and late variants were not mixed within units.

The Sexton was initially based upon the chassis of the Canadian built Ram variant of the M3 Lee and M4 Sherman chassis, with the Canadian Grizzly, a variant of the M4A1, forming the basis of the Mark II. The main gun was the Quick Firing 25-pounder gun, which was capable of firing High Explosive and Armour Piercing ammunition. Mostly used as artillery support for armoured and motorized infantry units, this vehicle could keep pace with the advance and help to clear the way.

Each model comes with suitable gun crew figures, three to a weapon. The kits themselves follow the now standard ‘style’ associated with PSC – the up-scaling of the kit leads to slightly thicker parts than in other kits, making the finished models ideal for prolonged tabletop usage. These are ‘proper’ wargames models!

Plastic Soldier Company cover so much of WW2 and, with their different scales of the same kit, offer a great deal to the gamer.