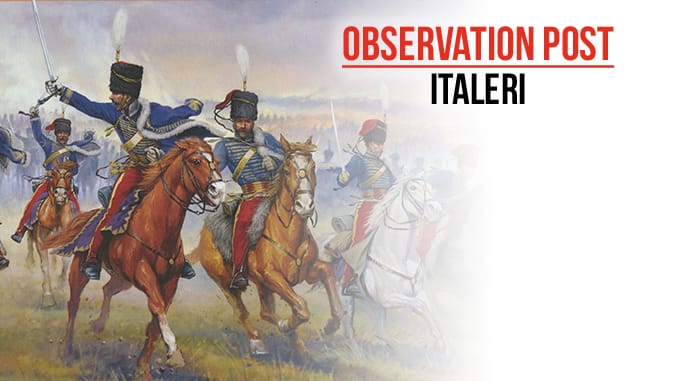 As we have recently been working closely with Rupert Mitchell of Drum and Flag to understand more about the world of the plastic soldier (see recent articles in the magazine), we thought it was about time we reviewed some for ourselves. This time around, we have two 1/72nd boxed sets from Italeri, one containing British Infantry and Sepoys from the Colonial Wars and the other British 11th Hussar cavalry from the Crimean War.

The British Infantry and Sepoys boxed set contains 50 figures on two frames. The same poses are repeated but the poses themselves are all useful for wargaming. There are two command sets consisting of an officer, bugler and standard bearer, plus a casualty figure and one dragging an ammunition box. There are 10 Sepoy miniatures on one of the frames, basically Sikh warriors.

The British 11th Hussars cavalry set contains 12 rides and their mounts, all posed at the charge and complete with suitable bases. The horses are well animated, and the riders look the part, some with pelisses streaming as they charge home. The uniform detail for these riders is remarkably good, with the braid and loops on the jackets being easy to see.

The plastic used to create these miniatures seems to be less ‘soft’ than the Airfix soldiers of my youth. Yes, the weapons and legs on the horses are a little ‘bendy’ but could be stiffened with PVA glue or another technique. Most importantly, it’s a tough material, suggesting that the figures themselves would have a fair bit of ‘long term survivability on the tabletop.

Marketed as ‘Wargames Approved’, these and similar boxes provide an alternative for those looking for a cheaper option than the metal miniatures on the market. If you’re looking to bulk out a 20mm army, these are a good option. Personally, I wish these were in 1/56th or 28mm, but can’t deny that plastic soldiers and their production have come a long way in recent years.

Take a look at these close ups from each box