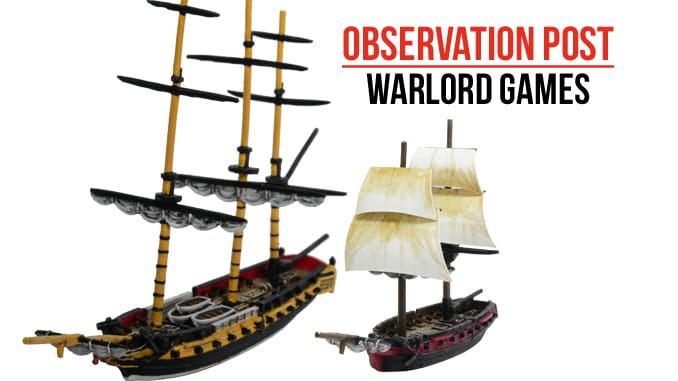 Warlord Games are on the cusp of releasing their new game Black Seas. Based upon combat between sailing vessels during the Napoleonic era, an integral part of the new game’s release will be 1/700th scale plastic model kits. Two of these kits are shown here, a large frame consisting of a couple of ‘brigs’ and a single frigate.

A brig is a sailing vessel with two main, square-rigged sails, with the predominant sail being located towards the aft.  Fast and manoeuvrable, they were employed as both merchant and naval vessels. The brig frame consists of enough parts to make two ships, both of which are armed with deck mounted cannon, 9 each side, to make this an 18-gun vessel. Hull sides and deck are designed to fit together very easily, with bowsprit and fore and aft masts with spinnakers. There are options to vary the bowsprit and any sails present are furled.

The second frame offers the parts to create a single frigate. A frigate is still quite fast and manoeuvrable, has three masts and often two-gun decks, as shown here. This vessel has 19 guns per broadside, with 38 guns in total. The kit has plenty of options, with a choice of 3 different back plates (the stern part of the cabin of the ship with lots of windows) and 3 different figureheads (the sculpted statues adorning the front of ships of the era).There are also ship’s boats and a launch which may be added to the deck.

Future releases will include a 74-gun 3rd rate ship-of-the-line. Players will be able to have the choice of assembling their ships as either generic or famous named vessels using several backs and figureheads in metal or resin. This option will be found in the fleet boxes for each navy, with each separate back plate bearing the name of a specific ship sculpted on, plus its associated figureheads. Vessels from the British, French, Spanish and US navies will eventually be produced.

All ships will have several additional components contained in each box. Each ship will have a ship card and a wake marker needed to play the game, plus several components to enhance the models:  printed, laminated and pre-cut sails look great on the models and require very little effort to be added to the ships; a sheet of acetate ratlines (the rope ladders leading to the upper parts of the masts), which are also easy to cut out and apply and a large sheet with many flags and streamers which add a sense of completeness to any model.

These are superb plastic models, with planking detail and a number of options just on the frames. As a first release to accompany a game, these will no doubt cause quite a stir in the world of naval gaming. Even better, you can get your hands on one of these frames in WI384, where we’ll be giving away a frame on the front of the magazine and featuring the Black Seas rules in depth.