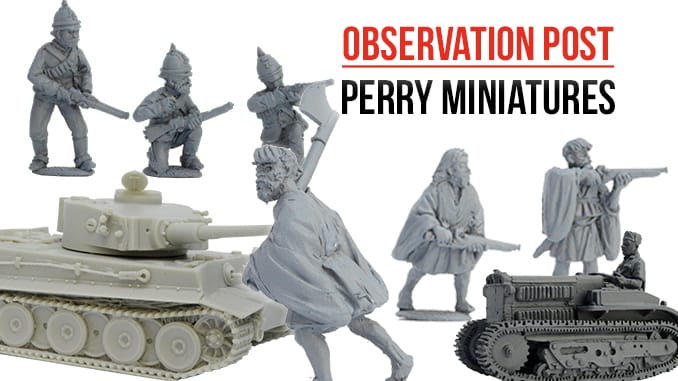 A mix of releases from Perry Miniatures and Blitzkrieg. For WWII, we have an early Tiger 1 tank as used in Tunisia. This was one of the few deployed at this time and was a shock for the Allies! They had some teething problems in the desert conditions but still gave a good account of themselves, helping to create the ‘Tiger Myth’ which often worked to the German advantage.

The Allies get an M8 armoured car (nicknamed the Greyhound in British service). This has some nicely modeled stowage around the turret and hull. Used primarily for reconnaissance and forward element support, this vehicle saw service throughout most of World War Two and on into the Korean War, and variants are actually still in service with some South American militaries.

Lastly, a quite unusual choice, a small Fiat tractor for use by Italian forces or their allies. Capable of towing small loads, this is less a prime mover and more of a mini puller.

There are two more Irish codes for the Wars of the Roses range. Despite the Irish never seeming to have used handguns in the field until 1504, Handgunners have been added as the styles and cut of clothing didn’t change much from 1400 to the 1570’s.

The other two codes are slightly richer Kern able to afford a little armour and better weapons. These are in nicely active poses, fighting hard at the forefront of the line.

Finally there are dismounted versions of the Natal Carbineers for the Zulu War to be found in the Victoria’s Little Wars range. These have the carbines, spiked helmets and bandoliers associated with many of the local and volunteer units who took part in the invasion of Zululand.

As is often the case, this is an eclectic selection of output from the Perry Twins and their associates. All are of course of a consistently high standard in terms of sculpting prowess but are additions to their own ranges which are often amply covered by those of other companies.