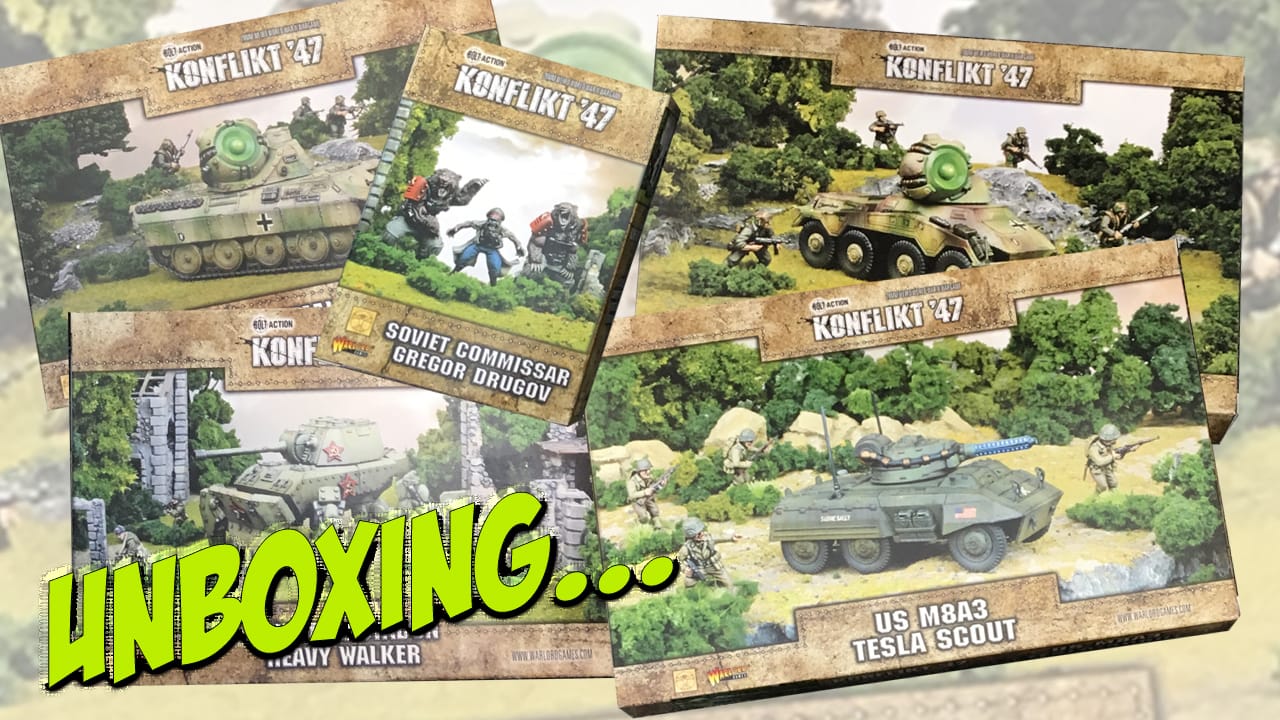 Warlord Games continue to produce a number of plastic, resin and metal kits which take some iconic vehicles from World War Two and add a Weird War twist.

The German Sd.KFZ 234 / X Puma kit consists of two frames which may be built as a standard plastic version of this German WW2 armoured car. However, also provided is an alternative resin cast turret. This represents a light Schwerefeld Projektor, one of the key weapons of the Konflikt ’47 rules which hits harder the heavier the target. In terms of the game, this takes the Puma from a ‘real world’ recce vehicle to a fast ‘tank hunter’.

The US M8A3 Tesla Scout also consists of two plastic frames, which may be assembled in its standard configuration or have the included resin turret added. The resin turret sports a light Tesla cannon, providing the vehicle with an anti-personnel weapon or one which may be used to engage the light Walkers fielded by the Axis powers.

Moving up a level from the recce or light tanks, we have the German Panther-X, ostensibly a plastic kit of a late war Panther, with some nicely done Zimmerit paste in evidence. The same paste may be found on the Konflikt ’47 turret version, a nice touch, which has a Schwerefeld Projektor. This gravity pulse weapon aids in reducing the armour on enemy vehicles and makes a useful pairing with a standard armed Panther.

After exploring adapted vehicle kits, it’s perhaps time to take a look at one of the unique parts of the Konflikt ’47 game universe, the Walker armoured vehicles. This particular version is a Soviet Mastadon Heavy Walker, basically a heavily armoured ‘walking’ tank. This is a resin and metal kit, with a 122mm gun and a plough to clear obstacles.

And lastly, something completely different…Total Weird War-ness here, with Soviet Commissar Gregor Drugov and his two Ursus soldier bodyguards. The Commissar figure is made from metal and is a partially ‘bear-ed’ Soviet hero, complete with uniform cap and an assault rifle. The two bodyguards are made from resin and retain none of their human features or sensibilities, entirely focused upon destroying the enemies of the Soviet empire in a whirlwind of teeth and claws.

The Konflikt ’47 range is ably supported by Warlord Games, especially as so many of their Bolt Action products can be used. Indeed, its easy enough to do, just a change of a turret or weapon and the kit may be used in either game. One kit, useful for two sets of rules? That’s just the Warlord Way!