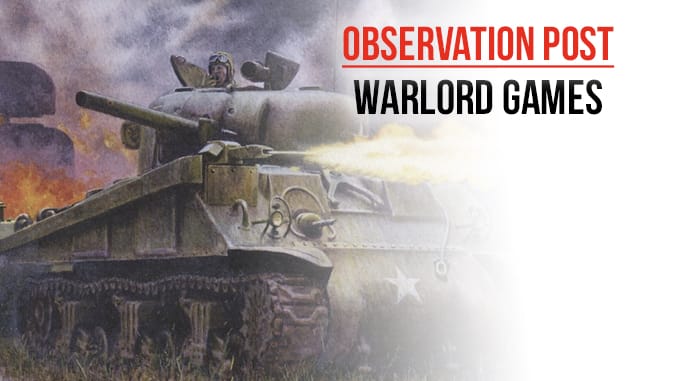 Warlord Games are one of the most prolific providers of 28mm figures and 1/56th kits on the marketplace. Their latest releases cover both Allied and Axis forces, with the M4 Sherman Crocodile and the classic 8.8cm FLAK 37, or the ‘88’ as it was known.

The M4 Sherman kit consists of plastic, metal and resin parts. However, although marketed as a M4 Sherman Crocodile, this is actually an M4A2 with the Bolt Action points and rules to enable use as three different flamethrower equipped tanks. The first is the Sherman ‘Zippo’, with its hull-mounted flamethrower and turret main gun and MG. The second is the later ‘Zippo’, which replaced the turret main gun with a flamethrower, retained the turret MG and kept an MG in the hull position. These ‘Zippos’ were pretty much used exclusively during the Pacific War.

The Sherman Crocodile used in Europe was similar to the early version of the Zippo but pulled a separate fuel bowser, an idea copied from the British Churchill Crocodile. This made the tank slower but gave the flamethrower a longer active usage on the battlefield, whilst retaining the main armament of the Sherman. It also meant that the fuel bowser could be removed from the tank when empty and increased the survivability of the crew if the fuel was hit.

Taking on this Allied ‘dragon’ is the precision ‘lance’ of the German 8.8cm FLAK 37. Originally designed as an anti-aircraft weapon, the ‘88’ or ‘Acht-acht’ proved its worth as a powerful anti-tank gun. The plastic kit allows for the creation of a deployed 88, with the ability to be modeled so it may elevate and traverse.

The kit also comes with a full, metal cast 7-man crew in standard German uniforms and steel helmets and a number of plastic shells and shell casings. Being plastic, the gun shield may be left off if desired, providing further options for portraying a weapon used in different theatres.

Both kits come with the now standard decals, data card and materials to create an explosion marker. The instructions provided are simple to follow, with clearly defined diagrams and written advice about the options that is helpful for the beginner and veteran alike. There is also a painting guide for each model, including the 88mm’s crew, which references the excellent Army Painter range. Overall, these are great kits with the gamer and the model maker in mind.