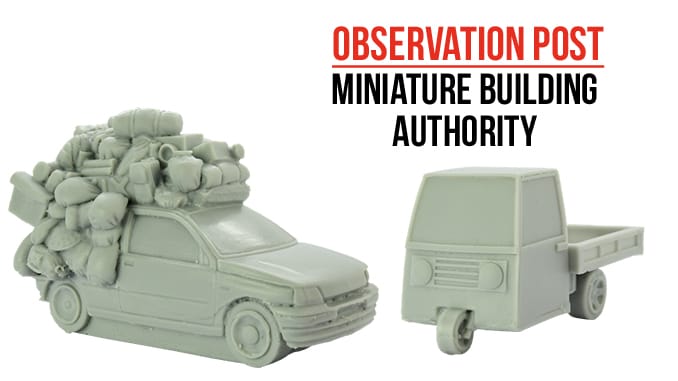 Miniature Building Authority of the USA has added two rather unique vehicles to their range of resin products. The Refugee Car and the Three-Wheeler with Flatbed are vehicles you’ve probably seen on the news or whilst overseas but may not have realised you needed until now.

The Refugee Car is typical of the family vehicles seen on the roads of many a nation. Based upon actual images of vehicles from the Middle East, this is a heavily laden vehicle, with pretty much everything the family owns loaded upon it. The ‘stowage’ is very nicely done, and includes a sofa, numerous boxes and bags, hessian sacks and more. To say this might be considered and ‘unsecured load’ is something of an understatement.

In contrast, the Three-Wheeler with Flatbed isn’t loaded at all, but that may be perhaps because even the simplest load could mean it doesn’t get far. Typical of vehicles found in the Far East or Indian sub-sub-continant, this is a small, one person vehicle intended to carry a minimum of cargo. Its probably absolute hell when taking corners at speed as well.

These are pretty much unique, which shows that MBA are looking to provide something that no other manufacturer has done. If you’re looking for civilian vehicles to populate your tabletop, and want to add a certain theme, these are just what you need.