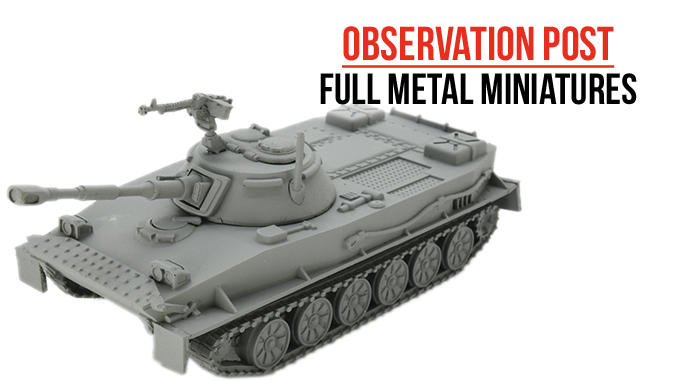 Full Metal Miniatures already have an impressive range of vehicles (at least ten at the last count) for the Vietnam war. They describe them thus “These vehicles are 1/56th scale and are designed to be handled and used for wargaming!” so they fit right in with the current crop of 28mm Nam figures.

The latest model sent for review is the PT-76. This soviet made amphibious tank was used extensively in the Vietnam War by the Communist People’s Army of Vietnam. This model is equipped with the standard 6.2 mm D-56T series rifled tank gun and DShk Machine Gun.

As well as in Nam, the PT-76 also saw action during the Indo-Pakistani Wars, Six Day War, Yom Kippur War, Angolan Civil War and during the Yugoslav Wars of the 1990s.

Destroyed PT76 after the Battle of Ben Het 1969

The model’s (separate piece) armaments and tracks are made of metal, while the hull and turret are made of white resin. A magnet in the hull aides the fitting together of these latter two pieces. Our model has been sprayed grey for photography.

The model measures 120mm in length and 40mm in height (base of track to top of turret). It’s a substantial piece of kit with smooth lines and pleasant weighty feel in your hands. All the parts fit very neatly with the minimum of fuss and retailing at £25/$30 that’s a good price for a resin/metal model.

If you are looking to add armour to your NVA forces, particularly if you have aspirations to re-fight the only tank Vs tank battle between the NVA and US forces during the Vietnam War – the Battle of Ben Het in 1969 (when the NVAs PT-76 light amphibious tanks faced off against US M48 Patton tanks) – then this model is for you.

P.S. We asked Simon form Full Metal Minis “what’s next?” and he told us –

“Ok so up and coming releases will include some more USMC for Vietnam, but not your usual figures! Some more VC and more vehicles for the US, ANZAC and NVA. Plus I will be releasing a brand new range in the next couple of months! Keeping it under wraps at the moment but when it happens you guys will be the first to know!”