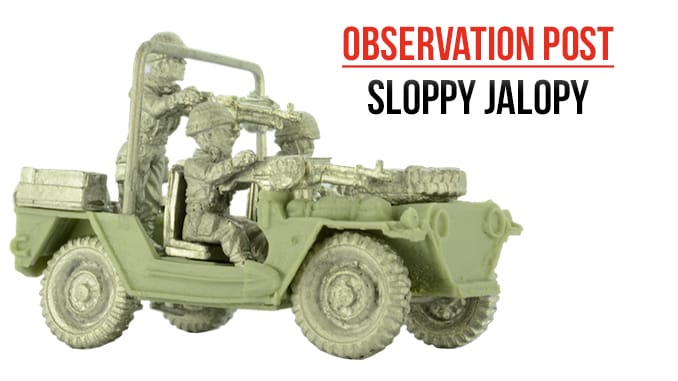 Sloppy Jalopy are now purveyors of a whole bunch of 1/56th Cold War era vehicles used in the 1970s and 80s. One of their most recent releases has been a number of 4 x 4 MUTT ‘jeeps’ as used by the Israeli forces of the era.

The MUTT truck, often called a ‘jeep’ as it is an elongated version of the WW2 and Korean War versions, was once the workhorse of the Israeli Defence Force. Tasked with light reconnaissance and anti-armour roles, the vehicle was equipped with heavy machine guns, TOW launchers and recoilless rifles during its service.

The version sent to us for review is the fire support and reconnaissance variant. Equipped with both forward firing and pintle mounted general purpose machine guns, this vehicle is capable of laying down some serious firepower.

The kit consists of a resin main body with metal accessories such as axle and wheels, a spare tire, stowage and anti-wire bar. There are also two GPMGs, one designed to fit on a mounting point on the passenger side of the vehicle and the other with a 360-degree machine gun mount which attaches to the floor. Some stowage is also moulded onto the resin vehicle, making this a very ‘real’ example of a MUTT in service.

Also available from Sloppy Jalopy is an Israeli Defence Force four man crew set for the vehicle. Three of these are shown in the vehicle sent for review, with the fourth designed to be used with the TOW launcher version. These crew are similar to those from the old Mongrel Miniatures range, now available once again from Badger Games.

It’s always good to see old ranges revived and more Cold War era vehicles. This same MUTT could be used for US and other NATO forces but makes a suitable addition to those who field IDF troops.