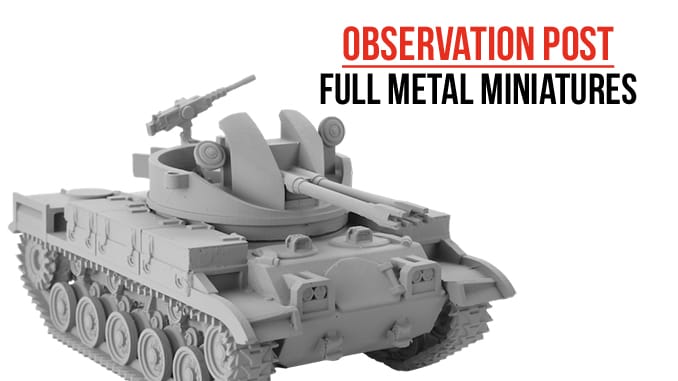 Full Metal Miniatures have added another vehicle to their Vietnam range, the M42 Duster anti-aircraft tank.

The M42 Duster was developed as an anti-aircraft weapon armed with twin 40mm bofors guns during the Korean War. During the Vietnam War the air threat never really materialised from the North and as such the Duster’s role changed from anti-aircraft to infantry ground support. In this role it excelled. Its high rate of fire earned it the nickname “Fire Dragon” from the North and Viet Cong forces. Earlier versions of the Duster had straight barrels, this later version has the trident flash suppressors fitted.

This model is cast in resin and metal and requires some assembly, although this is a simple enough process. The level of detail is very good, complete with positions for seated crew alongside the Bofors guns. This is a sturdy, wargaming model, designed for prolonged use and robust enough to survive regular transit.

Another quality product from this relatively young company, one of a select few miniature manufacturers currently offering figures and products for the Battle of Hue 1968.