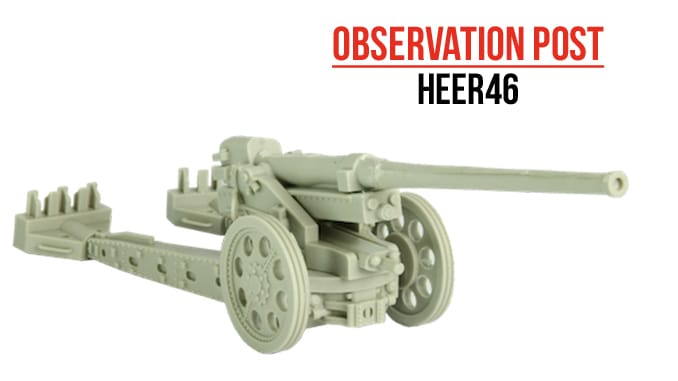 Heer46 are still working on their excellent Fallschrimjager figures, with more to come soon. However, they have managed to release a resin version of the Ansaldo 149/40 Model 1935 heavy field gun.

Produced by Italy and used during World War Two, only a few were made as a replacement for the obsolete Cannone da 149/35 A. A grand total of 51 were actually in service by September 1941. When the Italians surrendered to the Allies in 1943, captured examples were used by the Germans as the 15cm K 408. In fact, the Ansaldo company produced a batch of 12 for the German Army in April 1944.

Considered a good design overall, the fact that the trail spade plates had to be forced into the ground to anchor the gun in place was an unusual one. The gun was able to be broken down into two ‘loads’ for transport, and could be further broken down into four loads for use in mountainous terrain.

The Heer46 version is a really nice kit, simple to build and made from sturdy resin. As always, Heer46 are willing to bring something unique to the 1/56th – 28mm gaming market, with the use of CAD bringing almost an exact replica of the real thing to the tabletop. A great product from a fine company.