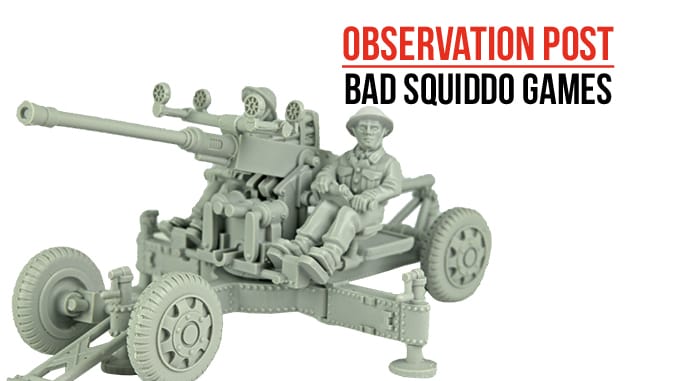 Bad Squiddo Games have continued in their self-appointed ‘quest’ to shed light upon the important role undertaken by women during World War Two. One of their most recent releases is a resin cast representation of the mighty 40mm Bofors gun as used in its role as an anti-aircraft gun.

The gun arrives in a large clamshell pack as a resin cast 14 piece kit and consists of 8 figures, plus a number of extra pieces including 3 ammo boxes. The kit comes with simple to follow instructions and may be painted prior to assembly to aid in the process.

Intended to represent a part of the Air Defence in Britain, all the loaders and spotters in this kit are females, something you don’t see in similar offerings. However, the dictates of the War Department said that only men should be allowed to fire this type of weapon, so there are two male firing figures included.  For those looking to add some ‘a-historicality’ to the final model, there are also two extra female figures which may replace them.

This is a fairly pricey kit, but is cast from high quality resin which really captures the details incredibly well. Some careful thought allows for the ‘switching out’ of the crew members directly ‘person-ing’ the gun, and another crew added for use beyond the shores of the UK. It’s certainly worth a second look, and is a great tribute to those women who served alongside their male colleagues during the war on the Home Front.