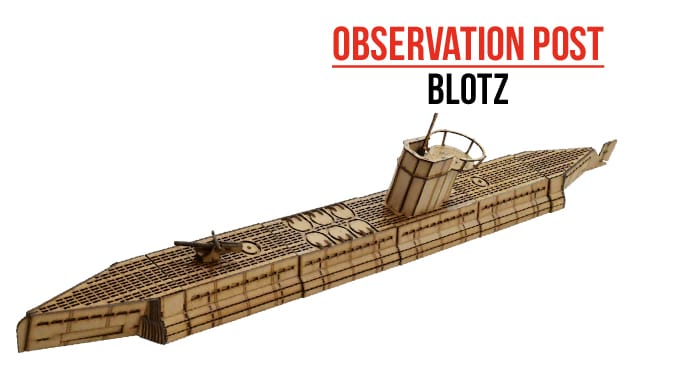 Blotz, a terrain company which works in MDF, has released a multi-part model which builds into a piece of tabletop terrain that is almost a tabletop itself!

Made from precision laser cut 2mm and 3mm MDF and requiring assembly, this submarine is suitable for use in a variety of eras, including World War II, Pulp, Modern and more. The building process is fairly simple, with each part of the overall model being split into six distinct sections.

Each of these sections is actually available to buy separately from the company and may be combined with other sections to change the layout of the submarine. In this way, it would be simple to theme the submarine for a range of genres – buy an extra deck section and you could swap the missile launching tube section to create a more World War Two vessel. Equally, remove the deck gun piece and replace it with an extra row of missile tubes to make a more modern looking nuclear age submarine.

The overall dimensions of the completed model is approximately:

This means that the every inch of the submarine, from the bow to the conning tower, is large enough to accommodate 28mm sized figures on 20 or 25mm bases. Consequently, skirmish battles may be fought the length and breadth of the model, meaning it serves as both a terrain piece and battleground.

Supplied unpainted, the MDF would appear to take paint very well, so an airbrush or spray can of suitably coloured paint would help with basecoating. A large brush, some drybrushing and a little weathering with perhaps rust spots would complete the overall look.

This is a large vessel but one which has been designed with storage in mind. The option to use a mix of sections makes for even more opportunities for gaming. A well thought out kit with the gamer in mind, this is worth a look.