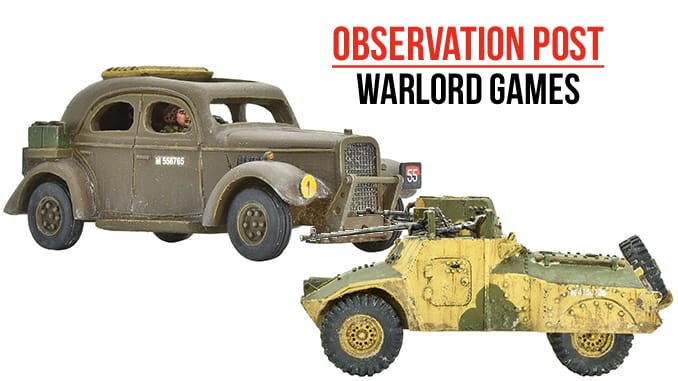 Warlord Games have a host of vehicles and miniatures that are only available via their direct mail order system. Some of their latest are designed for use with the Campaign: Operation Sealion supplement for the Bolt Action rules system.

There are 4 vehicles, produced in resin and with metal parts, that have been added:

The ‘Malcolm Campbell’ armoured car is intended for use by the Home Guard. When Sir Malcolm Campbell was the provost company commander of the 56th London Division, Home Defence Force, he designed and then built the prototype of the Dodge armoured car which was unofficially known as the “Malcolm Campbell” car. Seventy of these were built by Briggs Motor Bodies of Dagenham and were ready by the end of August 1940. This vehicle sports an armoured radiator and windows, with firing ports for Lee Enfield rifles.

The Morris Light Recce Car was produced by the Morris Motors Limited, based on one of their existing civilian lorry chassis. The vehicle had an unusual internal arrangement, with the three-man crew sitting side by side by side with the driver in the middle, a crewman manning a small multi-sided turret mounting a Bren light machine gun on the right, and another with a Boys .55 inch anti-tank rifle (mounted in brackets in the hatches on the hull roof) and access to a radio set on the left. From 1940 to 1944, over 2,200 were built. The vehicle was used in the North African, Italian and in North-West Europe campaigns. Some served with the RAF Regiment, others were given to Polish units. Consequently, no crew figures are provided so you can decide to whom it belongs.

The British Army Ford WOA1 staff car was an adapted standard four-seater civilian vehicle which was fairly standard for use by senior officers during World War Two. This particular vehicle has the canvas top open and is famous for being the type of staff vehicle that Queen Elizabeth (Princess at the time) drove during WWII. Consequently, you can place a driver model based upon Princess Elizabeth and a passenger inside.

The final vehicle is a British Civilian Ford WOA1 Car, with canvas roof closed. In 1940, only about one family in five owned a car; most people relied on the well-developed public transport system. Most civilian cars were decommissioned during the war as petrol was at first rationed then eventually denied to civilians altogether. Petrol coupons could still be had for essential war service, so some private cars were used both as troop transports and for towing the Smith Gun.

These are just some of the unique vehicles available direct from Warlord. There are also other specialist items for other games systems, so its worth checking out what is on the Warlord website for your favourite period.