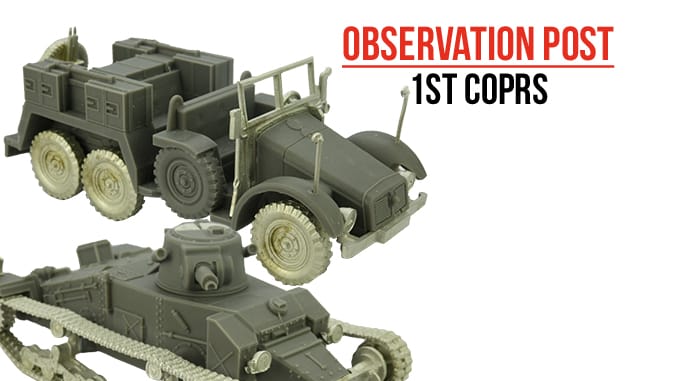 1st Corps continue to add to their growing range of 1/48th vehicles for World War Two. Two of the latest are a British armoured fighting vehicle and a German artillery tow and transport.

The British armoured vehicle is an A11 Matilda. This is labelled as a ‘Later Production’ version of this infantry support tank but was actually phased out after service in the early period of the war, up until 1940. Although the tank had thick armour, it only had a single turret mounted heavy machine gun and was very slow, in order to ‘keep pace with the advancing infantry’.

The model itself is a mix of resin and metal parts and is simple to assemble. The final effect is pretty much a perfect replica of the real thing, with great detail such as grills and rivets on display.

The second vehicle is a KFZ69, the Krupp Protz Artillery Tow. Designed to pull medium to heavy artillery pieces, this six-wheeled vehicle had seating space for a 6 – 8 people and had storage space for ammunition and other equipment.

Once again, this model has resin and metal parts, with some quality detail. This model is even simpler to assemble and has a solid looking appearance.

These are just two examples of an ever-increasing range, which complement those figures with a more solid, chunky appearance. The use of 1/48th scale may not appeal to every WW2 gamer, but with quality like this, they are well worth a second look.