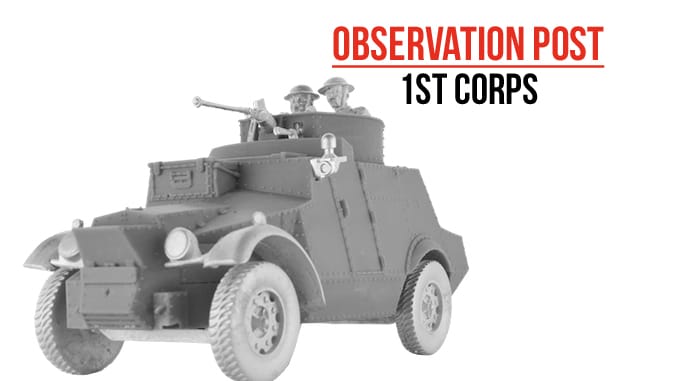 The Morris CS9/Light Armoured Car was a British armoured car used by the British Army in the Second World War. The vehicle was based on a Morris Commercial C9 4×2 15-cwt truck chassis. On this chassis, a riveted hull was mounted with an open-topped two-man turret. The armament consisted of either a Boys anti-tank rifle Boys anti-tank rifle and Bren light machine gun or a Vickers medium machine gun. The vehicle carried a No. 19 radio set.

First delivered for active service in 1938, the vehicle saw service during the Battle of France, and then went on to be used during the North Africa campaign. Although its wheels coped well with the soft sand, they were eventually retired from service due to the lack of thick armour and outmoded weapons.

The MKII Universal Carrier also known as the Bren Gun Carrier from the light machine gun armament, is a common name describing a family of light armoured tracked vehicles built by a number of companies.

The first carriers – the Bren Carrier and the Scout Carrier with specific roles – entered service before the war, but a single improved design that could replace these, the Universal, was introduced in 1940.

The vehicle was used widely by British and Commonwealth forces during the Second World War. Universal Carriers were usually used for transporting personnel and equipment, mostly support weapons, or as machine gun platforms. With some 113,000 built by 1960 in the United Kingdom and abroad, it is the most produced armoured fighting vehicle in history.

Both vehicle kits have resin bodies with metal fittings such as wheels, tracks, weapons and crew. They are simple to assemble and pretty robust. Being 1/48th, they may out scale some ranges of miniatures but would work well with larger 1/56th scale miniatures.