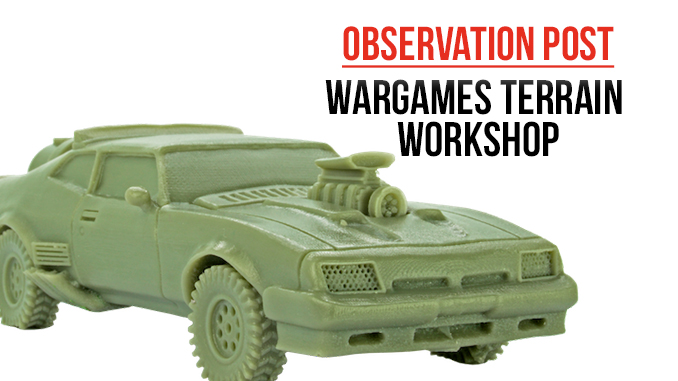 Wargames Terrain Workshop produce high quality resin items. Ranging from scenery to vehicles and figures. Some of their most recent releases are for the Post Apocalyptic genre, cars designed to survive the Wasteland.

The first vehicle is an adaptation of a 1950s or 60s American pick up, with armour plates added to the windows, enlarged rear wheels and rather exaggerated exhausts. The rear compartment is open, and capable of taking a 28mm figure, although this would have to be either on a very small base or glued in place without one.

The second vehicle bears a resemblance to those used by certain Wasteland scavengers. The vehicle has an air intake built into its engine, plus what looks like two long range fuel tanks which replace much of the rear seats and trunk. This is a largely intact version, with headlights and rear lamps still ready for use.

These two resin models are just a couple of those available from the company. They are the latest in a whole range of vehicles, scenery and miniatures that will aid any gamer looking for something classically Post Apocalyptic.