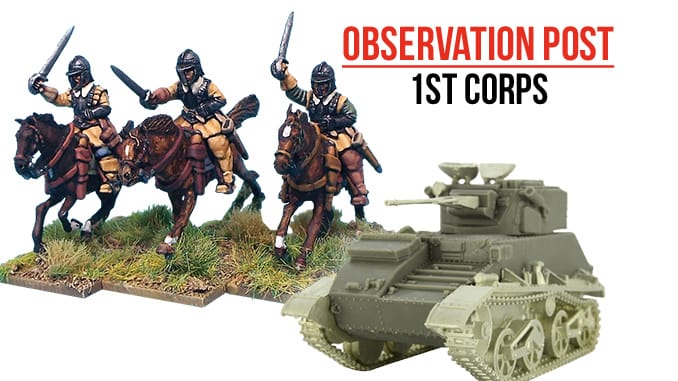 1st Corps have always got new items ‘on the boil’ to add to their ranges. Two of their most popular at present are their 1/48th Armour and 28mm English Civil War Horse, both of which are due to see serious reinforcement in April at Salute.

In the 1/48th World War Two armour range, we have the Interwar and Early war stalwart of the ‘armoured cavalry’, the British Vickers VI Light Tank. The hull and turret of this self-assembly kit is cast in resin, with metal track assembly, weaponry and hatches. As always, the quality of casting is excellent, with some great detail, right down to the rivets on the hull. This scale of vehicle compliments the figures produced by the company, and would best fit with the larger, ‘chunkier’ size of infantry miniatures.

The steady release of figures for the English Civil War has seen both infantry and cavalry packs. One of the latest is ECWC17 Cavalry Command 1 on Walking Horses. This consists of 3 rider figures and horses, representing an officer, a standard bearer and a musician. The pack comes with options, in the form of a choice of hands clutching swords or pistols. Simply pick your desired weapon and ‘plug’ it into the space on the arm. However, the bugler doesn’t come with this option.

These are well sculpted and cast miniatures, that would work well with others from similar ranges. The release of more of the same at Salute isn’t that far away, and we look forward to seeing them.