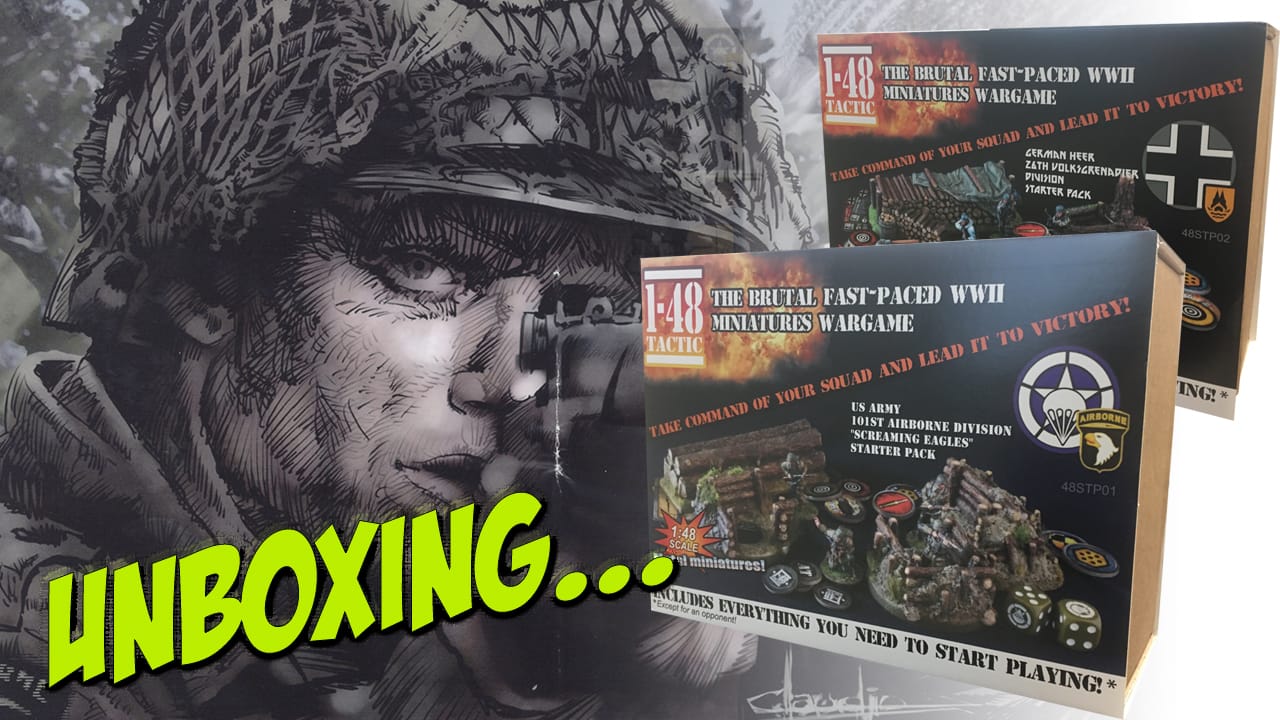 Baueda Wargames of Italy have have released these 1-48 Tactic Starter Sets, the basic sets behind the World War Two miniatures game produced by this ambitious company.

The first box is entitled German Heer 26th Volksgrenadier Division Start Pack. This contains metal miniatures, resin terrain pieces and everything else needed to use the rules system.

The box itself is plain brown, with a full colour slip over cover. Opening it up, each piece is carefully wrapped in bubble wrap beneath a layer of sponge foam. Beneath the foam layer is a rules sheet, laid out and printed in the style of a yellowed newspaper. The rules promise a ‘fast, one-hour wargame’ and are actually contained on one side of the double-sided A3 sheet. The other consists of a poster for the game.

After lifting this rules sheet out, we have 4 individual metal miniatures of late war German soldiers, produced at 1/48th scale. These are well-sculpted figures, with some accurate weapons and equipment, plus some useful action poses. Some of them require basic assembly. These correspond to the 4 named characters shown on the stat cards included in the set.

There are 4 resin pieces in the set, all in 1/48th scale. Most are based upon wood piles or similar, but there is a very nicely done wrecked Kubelwagen which adds a touch of narrative to the game being played. These are all cleanly cast and carefully sculpted pieces, in a sturdy resin.

The game components themselves consist of 25 large 25mm double-sided full colour markers, 12 double-sided grenade markers and 15 action markers. Finally, there is a pair of custom D6 for use with the rules system.

The second set is entitled US Army 101st Airborne Division ‘Screaming Eagles’ and has a similar mix of items, this time with 4 miniatures based upon late war US Airborne troopers, 4 resin defence barricades, cards for use with the miniatures and two green custom dice.

The obvious intention is that each player buys a separate starter set for their chosen force, then matches up with an opponent to play games. The quality of the contents of each box is excellent, and a lot of thought appears to have gone into them. The box itself is sturdy and functional, but would probably benefit from being replaced over time. As a quick and simple to play games system, this would work well for those looking for a ‘filler’ on a club night or a system that could be expanded in the future.