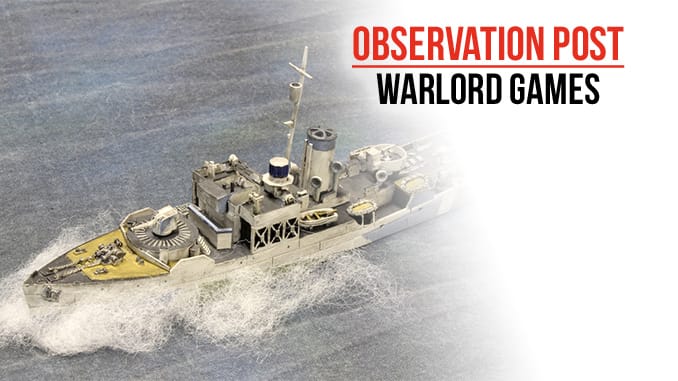 For this ‘guest post’ we asked naval wargame enthusiast Paul Davies to supply us with an in-depth review of the new Warlord Games Flower Class Corvette, used by the Allies in WWII.

The Cruel Sea by Nicholas Monsarrat was the first WW2 novel I read, and it remains my favourite WW2 war film too, so when I heard that Warlord Games were releasing a Flower class corvette, I was eager to get my hands on one.

The ‘Flower’ class corvette was one of the most modified of WW2 naval vessels, because their operational role altered significantly during the war, necessitating considerable alterations. The most obvious changes from the original design were a lengthening of the forecastle; an increased sheer which raised the deck at bow and stern increasing their height from the water thus increasing seaworthiness by reducing the volume of water coming on deck; a change in the angle of the funnel, moving the mast to behind the bridge, and wider Type C bridge which necessitated additional girder bracing beneath the bridge to support it. Also a twin 20mm power operated MkV replaced the 2pdr gun. And there were further differences between ships built in the UK and those built in Canada; most notable in the latter case that the ‘bandstand’ where the 2pdr gun was mounted, was moved further towards the stern.

Eventually these individual changes were grouped together to become the Modified Flower class. Many of these modifications were retro-fitted in stages to older vessels resulting a variety of different ‘looks’. Warlord’s corvette represents one of the modified class of ‘Flowers’ and with an overall length of 7in long and a 1.25in beam is to 1/350th scale. It is based on the Skytrex Flower class corvette, but has had the number of separate components reduced to make assembly easier and reduce production costs, which has resulted in a few compromises which I’ll cover later.

So what do you get for £28? Basically you get the hull and superstructure in resin, with the armament, the ‘lantern’ housing that contained the radar, and the mast, in ‘white metal’. There was a bit of flash on the resin, but its paper thin and easily removed by gently rubbing over the model with a toothbrush! The detail on the resin hull is reasonable, albeit with the caveat that it does not always have the crispness of a plastic injected plastic kit… but then again it doesn’t have as high a price tag either.

This is a wargames miniature not a fine scale model, so there are production compromises, most notably in the bridge area where the open area beneath the extended bridge is filled in with resin, with the supporting girder detail modelled on the outside edge. Its not ideal, but understandable, but the effect can be lessened by careful painting. There is a similar resin infill issue beneath the carley floats, and a similar painting ‘solution’ can be adopted.

The armament, consisting of the main 4” BL Mk IX gun, the two 20mm bridge mounted oerlikons, and the 2pdr (40mm) QF Mk VIII, the aft gun tub or “bandstand”, the early design ‘lantern’ housing for the radar, and the mast are all supplied as separate white metal castings. Both the BL Mk IX and QF Mk VIII are clearly identifiable with minor flash that can be easily scraped off.  The oerlikons are also well sculpted, but the barrels are extremely thin, so care must be exercised when trimming off the minimal flash on the end of the gun barrels.

Also included are metal RN crew, and two flagstaffs complete with metal flag. I definitely don’t like these. You can’t affix the Warlord printed ensigns to them because they have wavy edges, so I can’t see the point of moulding the flag with the flagstaff. I cut it off leaving the staff, and will add my own paper flags later.

You also get Large ship wake markers, a corvette data card and ‘sliders’. One minor error on the data card lists the main gun as a 3” when it was a 4”. This is a serious error if playing ‘Cruel Seas’ because a 3” gun rolls 6D6 for damage; a 4” gun rolls 8D6!

So summing up; for £28 you get an easy to assemble, respectable looking model, that is realistically priced, easy to assemble, and which successfully captures the look of a Modified ‘Flower’ class corvette and will enhance any Allied fleet. I have no doubt that there’ll be quite a few wargamers with a modelmaking background, myself included, who will be adding some extra detail to Warlord’s Flower class corvette to create something truly unique.

Words and photos by Paul Davies. Look out for Paul’s series of modelling articles for Cruel Seas, which have appeared in WI374 – WI379, all accessible via The Vault.