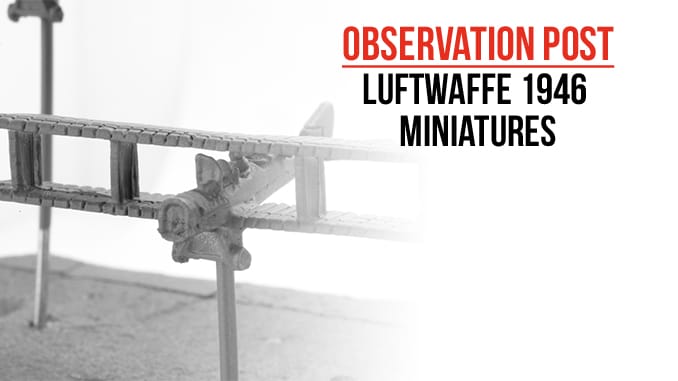 Luftwaffe 1946 Miniatures is perhaps best known for producing miniature aircraft from the beginning of World War Two up to the present day. Many of these miniatures are based upon both historically accurate and hypothetical aircraft designs. However, some of the newest releases in the range are focused upon a whole new era, World War One.

The latest releases shown here are from the Hostile Aircraft game and 1/300th miniatures series, which is effectively being re-released to a new market. The range includes aircraft from the Austro-Hungarian, German, United Kingdom, France and Italy. There are also 12 new aircraft which have been added to the overall range.

These miniatures are in mostly kit form, cast in a metal alloy. Shown in the photograph are German Fokker D.VIII and the Airco DH-9 from the UK, available in blisters of 3 aircraft each, which is the same for the majority of the fighter aircraft. However, the bombers are available as single, multi-part kits, simple to build but understandably large.

It’s always good to see a return of high quality figures ranges from the past, and these are high quality versions. They would work with any set of rules for World War One aircraft combat and are a welcome sight.