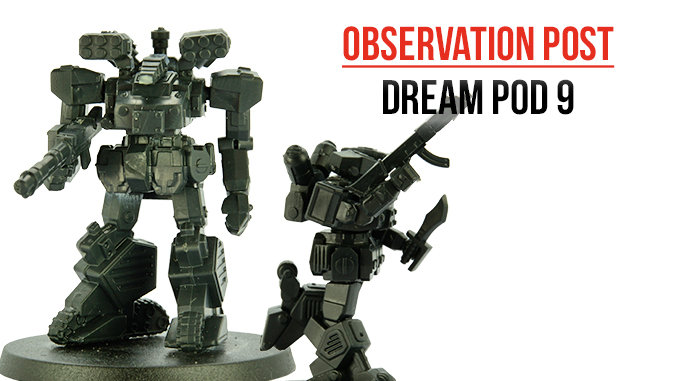 Dream Pod 9 of Canada and distributor Shiny Games of the UK have sent us a Northern Army Box for use with the Heavy Gear Blitz! rulebook. Gears are piloted combat mecha which are piloted by warriors from a number of factions in a war that spans the human galaxy.

The Northern Army boxed set consists of 14 Gear mecha model kits. There are enough parts to build 4 Hunter and Jaguar, 2 Grizzly, 2 Cheetah, 1 Kodiak and 1 Ferret class. A nice touch is that most come with additional weapons and options on the frames to make variants of the basic versions.

The models go together very easily, particularly when using the free assembly guides on the Dream Pod 9 website. The scale of the miniatures make them a little fiddly for the less nimble fingered (40 years old and above I’d say!) but they look good on the tabletop and come with suitably sized bases.

The standard of sculpting and molding on these miniatures is of a high standard and makes one think of the anime and manga that initially came out of Japan. However, these are more ‘military’ looking, more functional than those seen in other games. In a sense, they are more ‘realistic’ and appear as if they could be possible with sufficient advances in current technology.

The Heavy Gear game universe has been going for a few years now but this latest incarnation of the mecha, funded by Kickstarter, are impressive. Personally, I’d like to see larger scale versions but that’s only so I can put them together more easily! They no doubt work well within the rules system and could also function as suitably armoured suits in 1/100th / 15mm scale wargaming. A great set of models and one of many currently available from the company.